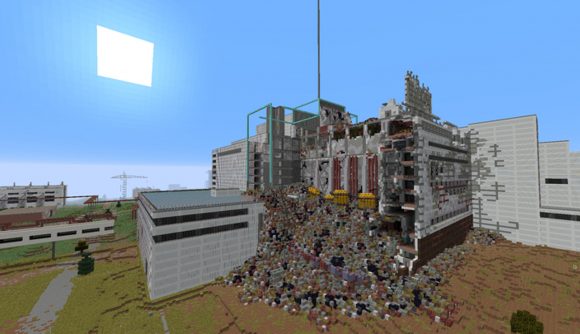 For the last two years, a Minecraft creator has been gradually building a map replicating the Chernobyl Zone. The project, called Chernobyl Universe, got a new update recently, and, though unfinished, already features many of the known sights of the radioactive area.

The latest version of the map, v0.02, adds the north part of the nuclear power plant, the substation and locations of new sarcophagus. On the Planet Minecraft page (cheers, VG247), map-maker Janisko explains the plan is to recreate the Chernobyl Zone as faithfully as possibly, using all available data. “I proceed with as much data as possible, which I draw mainly from the Internet, such as Google Maps and other useful things,” they write. “Of course, not all information can be obtained from the Internet, but unfortunately I do not have other conveniences of data acquisition, which means that when I am forced by this fact, I have to build a little interior improvisation.”

From there, the map will stretch out to neighboring areas, like Belarus and Poliske. Janisko primarily used two applications, MCEdit2 and Worldpainting. You can walk around the current build, though the idea is that eventually this is meant to be played in survival mode. Janisko listed their email address for anyone who might have more specific information on Chernobyl they can use in further construction.

Minecraft had a big week this week, getting inducted into the World Video game Hall of Fame. The building game‘s community continues to put out more and more impressive projects, like this recreation of Hogwarts that doubles as a magical RPG, and this playable version of Doom, because of course Minecraft has its own port of Doom. Developer Mojang recently put out dungeon-crawling spinoff, Minecraft Dungeons, which we believe is a fine adventure for younger players.

We have lists of the best constructions, best houses, and best mods, if you’re feeling inspired by Janisko’s work here. They estimate the finished Chernobyl Universe will be done by 2023.