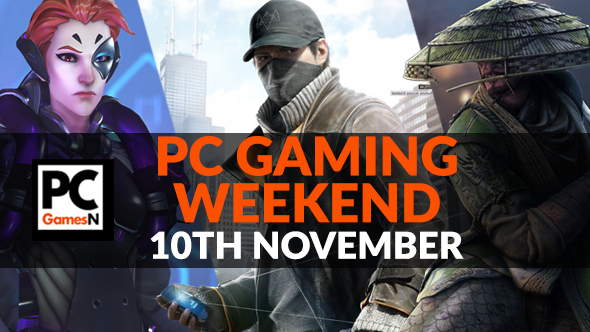 It’s the end of the working week and that means it’s time for us to reel off the best PC gaming you can get up to over the next couple of days. There are quite a few games available to pick up for free so don’t miss out on those. Not so many new games this week but football fans will be pleased and, we dare say, so should anyone into Star Wars. Have a look below for our PC gaming recommendations.

Grab a beta code for hack-and-slash MMORPG Wild Buster – we have 3000 Steam keys!

This weekend sees forthcoming action-based MMORPG Wild Buster: Heroes of Titan having a beta weekend. We have 3000 Steam keys up for grabs so that you can participate in it. Grab a mate and get lost in the game’s PvP and PvE offerings for the next few days.

Watch Dogs may be over three years old, and also have a sequel that is much better than it, but you cannot complain about getting it for free. Until the end of this weekend Ubisoft are letting anyone who wants Watch Dogs on PC pick it up at no cost. Don’t need any hacking for that.

Blizzard revealed that the next hero coming to Overwatch will be support healer Moira. She’s a scientist with the ability to drain power from enemies and turn it into healing power for her allies. She’s currently available to play in the PTR so give her a whirl.

Before the fourth season of Ubisoft’s online blade brawler For Honor arrives next week – bringing a new game mode and two new heroes – it’s available to play for this whole weekend at no cost. Don’t own it? No problem. Just download it and get stuck in.

The first Faction Rally for Destiny 2 has kicked off since the MMO shooter arrived on our platform of choice. You need to pick a side and fight for them before everything rolls over early next week. Represent!

Few things are as reliable as a new Football Manager turning up each year. And this year’s iteration is the best yet. It adds new social dynamics so that it actually feels like you’re managing human from behind the spreadsheets and not just pushing numbers.

Grab yourself a free legendary card simply by logging into Hearthstone

If you haven’t played Hearthstone before, or simply haven’t logged in for a while, then now would be a good time to hop in. You can get Marin the Fox from now and up until the release of the card game’s next expansion next month. More details on Marin are available at the link above.

Think you’ve finished chopping up Nazis? Well, you haven’t, because Wolfenstein II just got new challenge missions via the vault. That’s available to everyone who has bought the game. If you pre-order it or had paid for the season pass, however, you can now also play episode zero of the Freedom Chronicles DLC.

Battlerite has now exited Steam Early Access and is now available as a free-to-play game. It’s an online PvP arena brawler that puts the focus on precision shots and reactions in 2v2 and 3v3 battles. If you’re up for the challenge it’s well worth giving a shot.

Star Wars Battlefront II doesn’t properly come out until November 17th. The keenest of you will realise that isn’t for another week. However, the sci-fi shooter is available to play right now if you have Origin Access with its Play First trial.