Are you trying to defeat Starscourge Radahn in Elden Ring? There are over 80 Elden Ring bosses, but only a few of them are as fearsome as Starscourge Radahn. Despite being torn apart by Scarlet Rot, the Demi-God still has enough strength to hold back the stars and defeat any warriors who dare challenge him.

Cursed to forever wander the plains of Caelid, Radahn is capable of taking down anyone standing in his path. If you haven’t attempted to fight him, there are numerous NPCs that can tell you just how dangerous he is. You need to be prepared with one of the best Elden Ring builds, as well as the best summons and weapons in the RPG game. Our Blood Loss Samurai build is perfect for the Radahn boss fight as he’s weak against bleed effects.

Depending on your build, Starscourge Radahn can be one of the hardest bosses to fight against due to his remarkably versatile moveset. He can take chunks off your health from range, dealing massive amounts of damage with his gravity-powered bow and arrows. Up close, he doesn’t even need to use a weapon to kill you; he obliterates his foes by slamming his body into them. Here’s what you need to know to defeat Starscourge Radahn in Elden Ring.

How to fight Radahn in Elden Ring

You won’t be able to fight against Starscourge Radahn until you bring together the Dectus Medallion, activating the Grand Lift of Dectus between Altus Plateau and Liurnia of the Lakes. The Radahn Festival begins once you use the Grand Lift for the first time, allowing you to challenge Radahn, but you’re free to continue with the rest of the game until you decide the time is right. 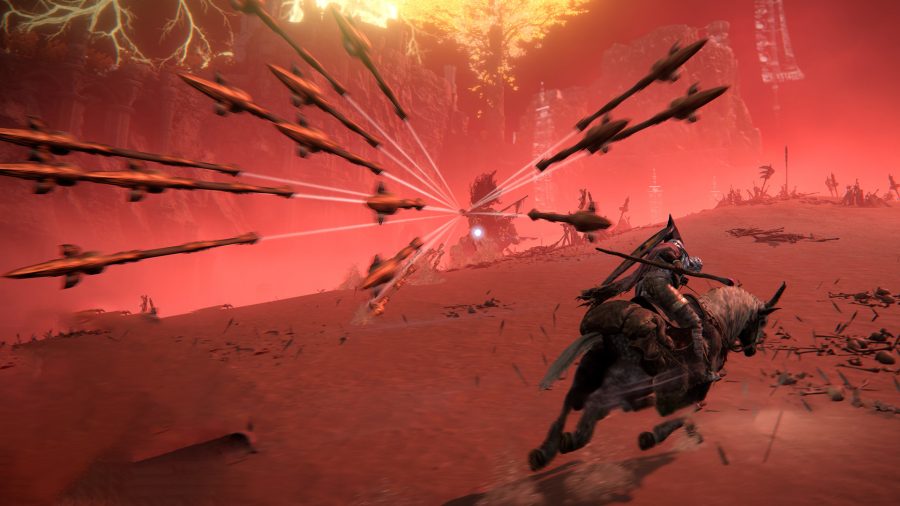 This fight is unlike any other Souls boss fight, forcing you to travel across the deserted Caelid plains before you can engage in combat. Right from the start, Radahn is ready to pelt you with Gravity Arrows. Though there’s a large distance between you and Radahn, you can lock onto him immediately – we recommend doing this to track his arrows. The most consistent way to avoid his long ranged attacks is to utilise the invincibility frames on your dodge roll, allowing you to evade any incoming damage.

While you can hop on your Elden Ring horse during this battle, we recommend waiting until you activate the first five summons signs directly ahead. These summons can be activated while riding Torrent, but you will have a much easier time avoiding the arrows using your dodge roll.

You want Radahn to spend most of his time firing arrows towards you at the beginning of the battle, giving your summons more time to make their way to the fight. The ideal time to arrive at the battle area is after your summons reach Radahn, placing his attention on them instead of you. 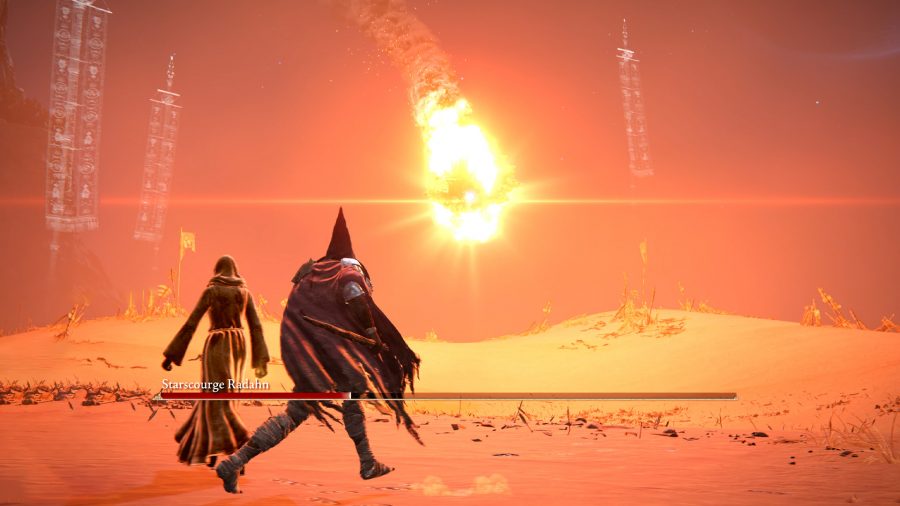 Once Radahn’s health bar reaches 50% or lower, he launches himself into the air for a few seconds before plummeting down to earth as a meteorite. Use this small window to heal up and summon as many NPCs as you can. As he falls back onto the battlefield, get on your horse and ride away from the incoming blast. If you’re on foot at the time of impact, you’re almost guaranteed to die as the attack is incredibly powerful.

Be aware of the gap between your character and Radahn during his second phase as he routinely uses gravitation pulls to draw you in. Once you’ve dealt some damage to him up close, run away almost immediately to ensure you avoid his gravity attacks.

When you finally reach Radahn, you should try to coordinate your attacks with your summons. Damage him with a constant barrage of melee attacks to break his poise, giving you a large window to land a critical hit. We recommend using a spellcaster as your spirit summon to deal damage while you and the summons fight up close.

Unless you want to learn all of Radahn’s attack patterns, you’re going to want to summon as many warriors as you can. Keep an eye on the amount of warriors on the battlefield – you should be able to hop on Torrent and find more summon signs if too many characters end up dying.

Mages should find this fight easier than their warrior counterparts, but not by much. The beginning of the fight is the same no matter what class you play, though mages need to wait for the summons to start attacking Radahn first. Radahn needs to be distracted to prepare your main attack: place the Terra Magicus sign on the floor before committing to your Meteorite spell. There’s a bit of RNG to this spell, but enough meteorites should fall on Radahn to force him into his second phase.

The same tactic doesn’t work as well during Radahn’s second phase as his gravity pull attacks instantly stop you in your tracks. Switch to Rock Sling during this phase, taking care to avoid Radahn’s fast attacks. If you want to play it safe, you can ride Torrent and use the Magic Glintblade to deal a small, yet consistent amount of damage. 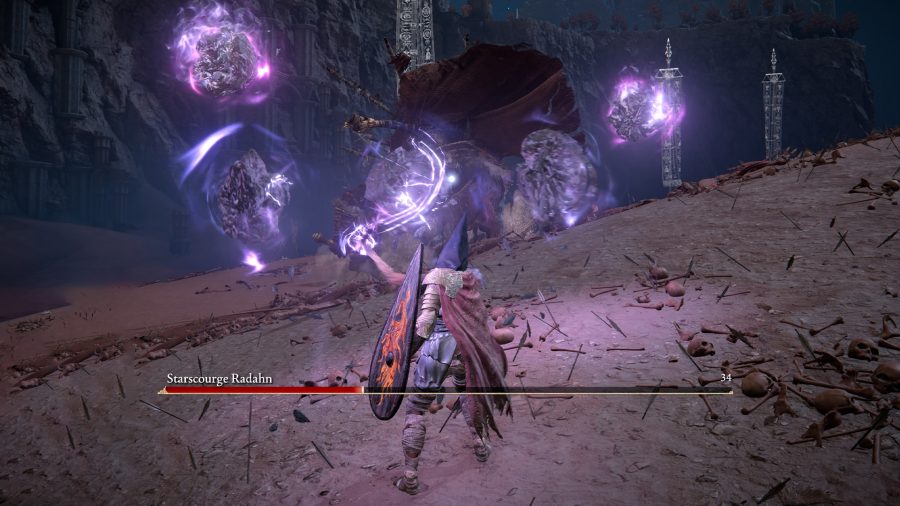 The easiest way to defeat Starscourge Radahn is to attack him using the Rotten Breath incantation. You can find out how to acquire this incantation using our Elden Ring Dragon locations guide, though you need to put 15 points in Faith and 12 points in Arcane beforehand.

Attacking Radahn using Rotten Breath afflicts him with Scarlet Rot, dealing a consistent amount of damage over time. If you can keep the summons alive, you can ride around the area waiting for Radahn to switch to his second phase. Attack him once more with the incantation to trigger Scarlet Rot again, slowly draining Radahn’s health until he drops dead.

And that’s everything you need to defeat Starscourge Radahn in Elden Ring. This is one of the trickiest fights in the fantasy game, just remember you can respec in Elden Ring once you defeat Rennela, Queen of the Full Moon. It’s also worth going to the Elden Ring Divine Towers to activate a Great Rune before the fight – Godrick’s Great Rune in particular raises all of your attributes to +5.