Keen to find the best Genshin Impact Ningguang build? Ningguang is responsible for building the Jade Chamber that floats above Liyue, an airborne palace that is used by the Qixing to monitor everything in the region. This catalyst-wielding Geo character is capable of dealing high amounts of burst damage to a single target, perfect for any situations where you have a limited amount of time to deal damage.

Ningguang is more than capable of dishing out damage without the need for any boosts from her party members. This isn’t to say Ningguang isn’t a team player – she can also provide substantial protection for her team thanks to her ability to create massive Jade Screens, which block projectiles and deal AoE damage – but she won’t be needing help to do what she does best.

Though Ningguang can be built with a support role in mind, she does extremely well when specialising as a DPS character. Here’s everything you need to know about how to create the best Genshin Impact Ningguang build for both DPS and support.

Ever since the Genshin Impact 1.3 update dropped, Ningguang’s damage output has received a significant buff. Fortunately, you won’t have to change the way you fight as her playstyle remains largely the same. The optimal attack pattern for Ningguang is to attack with Sparkling Scatter while holding forward – this cancels the animation of her attacks right after firing a projectile, allowing you to deal more damage in a shorter time frame. Follow up your normal attack with a charged Sparkling Scatter to hurt your target with one large burst of damage. 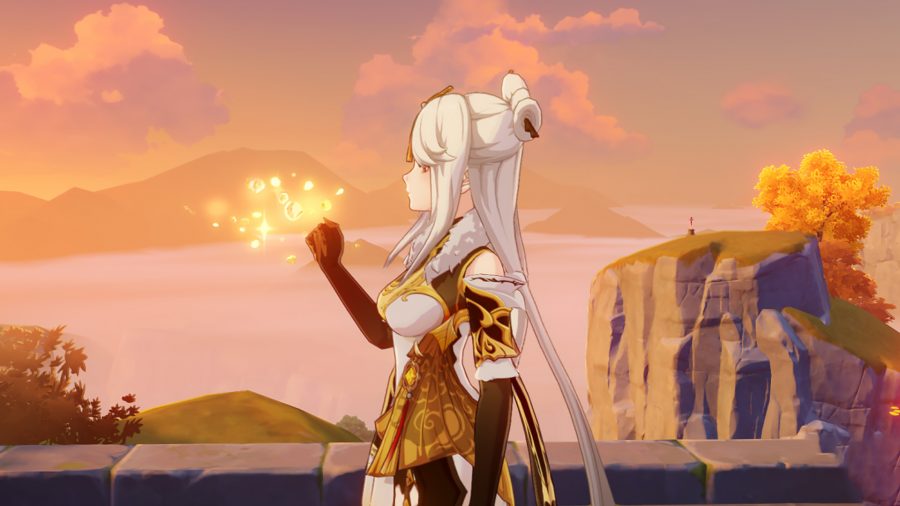 Not only can Jade Screen be used to block enemy projectiles, you can also pass through it as Ningguang or any of your party members to gain Geo damage bonus. Try to do this before attacking with Ningguang to maximise your basic combo string. The endurance of Jade Screen scales with Ningguang’s max health, so picking the right Genshin Impact artifacts is important in order to create an optimal build.

You should try to aim for artifacts that provide Ningguang boosts to her attack, crit damage, and Geo damage bonus. A lot of the damage Ningguang deals is through Geo damage, so the two-piece Archaic Petra set works well here. It may be tempting to go for the four-piece bonus, but this only benefits a support build. Instead, you can increase Ningguang’s damage even further with the two-piece Gladiator’s Finale set, which boosts her attack stat by 18%.

As for weapons, there are quite a few options, but we’ve settled on Lost Prayer to the Sacred Winds. This will give you the highest DPS possible when attacking, but not everyone will be able to acquire this five-star weapon. A great alternative to this is the four-star Royal Grimoire due to its increased crit rate. 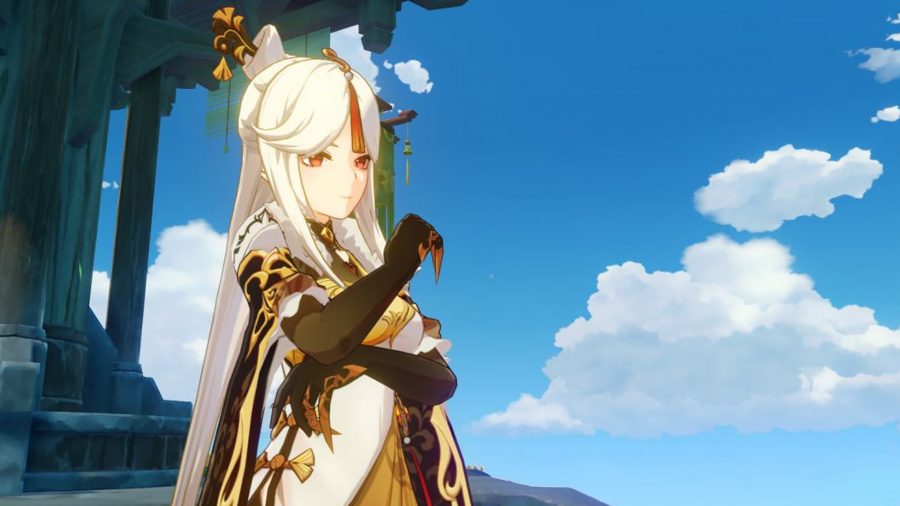 Building a team around Ningguang is easy thanks to the limited amount of Geo elemental reactions in the game. We’ve gone for Jean as our healer alongside Venti in a support role to maximise Ningguang’s damage output. Ningguang’s biggest weakness is her lack of AoE damage. While her damage output is impressive against single targets, there’s very little she can do against a group of enemies.

While you can afford to be creative with your team composition, we would highly recommend including one other Geo character to gain elemental resonance bonuses. If you’re looking to deal more single target damage, go for Genshin Impact Albedo as he regenerates energy quickly – perfect for Ningguang’s burst attacks. Genshin Impact Zhongli also works well with Ningguang thanks to his protective shields, but you may not need his defensive abilities depending on the rest of your team composition.

Create a Jade Screen that blocks enemy projectiles and deals AoE Geo damage to nearby enemies.

Ningguang gathers numerous gems, scattering them around the battlefield before firing homing projectiles at nearby enemies. This attack deals heavy amounts of Geo damage. Casting Starshatter near a Jade Screen will cause the Jade Screen to fire additional gems at the same time.