Are you trying to defeat the Perpetual Mechanical Array boss in Genshin Impact? You’re going to need to strengthen up your team in order to take down the massive Pyro boss. Defeating this giant rewards you with a perpetual heart, one of the items needed to level up Ayaka. In addition to perpetual hearts, you’re going to need to find sakura bloom around Inazuma to take Ayaka to the next level.

Make sure you have an Electro character in your party before heading off to the arena – check out our Electro Traveler guide to find out how to switch your character’s elemental abilities. To access the boss arena, you need to travel to Jinren Island, which is north of Narukami. If you haven’t reached this island already, you can unlock it by sailing to Jinren via boat. You should be able to find an Electrogranum isolated on top of a tall rock – activating this takes you directly to the boss fight.

This fight can be tricky, so we recommend popping down a portable waypoint to make it easier to travel back to this location. We’ve broken down all of the boss’s attacks to help you take down the Perpetual Mechanical Array boss in Genshin Impact.

The Perpetual Mechanical Array begins the fight as a single target before splitting off into four separate pieces. You should aim to deal as much damage to the boss as possible before it splits off, as it’s very easy to land attacks while in this form.

The boss can hit you with several attacks that can be avoided once you recognise the patterns. The first attack sees the Perpetual Mechanical Array transform into a rocket, blasting into the air before crashing down. This is easy to avoid, as the transforming animation takes a while to launch the boss into the air. Once the rocket is airborne, watch out for the glowing red circle and dash before the boss drops onto you.

The second attack turns the Perpetual Mechanical Array into a spinning top, dealing damage to anything in its path. Dashing out of the way before it hits you is a guaranteed way of avoiding damage. You can use a similar method to avoid the boss’ third attack where it attempts to hit you with a laser beam. This beam is so slow, you don’t even have to dash to avoid it.

The fourth attack is an orbital strike which places a marker on your character before dropping a laser beam directly on the target. All you need to do is dash out of the way to avoid being hit. Finally, the last attack in this form is the blade attack which is difficult to evade thanks to its impressive speed. This attack can instantly take away a large chunk of your health, so you have to react quickly once you spot the startup animation. 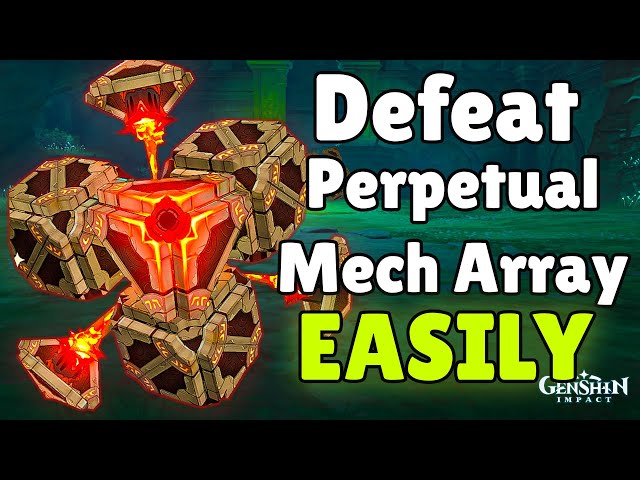 Once you bring the boss down to around 70% of its health bar, the Perpetual Mechanical Array splits into four different forms. These forms resemble a jellyfish, snake, spider, and four triangles. Each of these forms has their own set of attacks, but they are largely the same as the attacks in the first form. Keep an eye on the jellyfish as it routinely drops glowing balls which regenerate some of your health.

The main things to be cautious about are the projectiles from the spider and the triangles – these attacks can hit you when you least expect it due to their range. Though the snake might seem threatening as it can dig into the ground, it’s primary attack is very similar to the rocket attack in the first phase.

Each form contains its own health bar; if you defeat one of these forms, the Perpetual Mechanical Array enters a weakened state where it cannot defend itself. This is your only opportunity to deal as much damage as possible before it resets back into the four forms. Depending on your damage output, you may need to deal with this phase twice before you can deal enough damage to kill the boss.

That’s all you need to battle the Perpetual Mechanical Array boss in Genshin Impact. There’s plenty of new content to check out in the Genshin Impact 2.0 update, including the brand new Inazuma region, home to characters like Yoimiya, Sayu, and Kazuha. Don’t have enough primogems to unlock these characters? Head on over to our Genshin Impact codes guide to claim some in-game goodies.