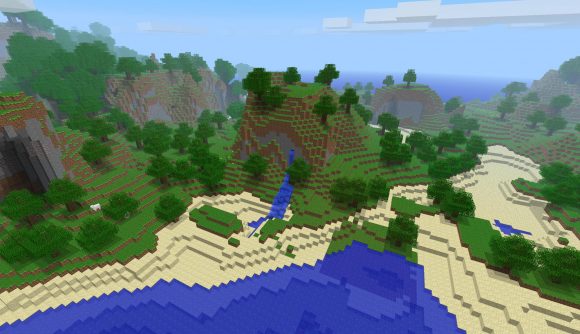 Another long sought after Minecraft seed has been discovered. The pack.png seed, the world that contains the default image for the server select screen, was recently found by a set of dedicated fans of the building game.

An image confirming the find was tweeted by prominent Minecraft content creator SalC1, who’d been chasing this particular landscape since the start of the year. In July, he uploaded a video explaining the quest he and his cohorts had been on so far, and it’s been quite the adventure.  Back in January, SalC1 put out a video looking for assistance in tracking down this classic Minecraft image, querying the original creators of the game if they had any possible insight.

Lo, some responded, albeit slightly unhelpfully by basically saying it was a random choice, found well before using specific seeds was a thing, so no co-ordinates or helpful data. But, some community members were interested in helping, and the search for the seed of the low-res image ensued. The group convened over Discord, discussing ideas and ways of figuring this all out. An AI was built to recreate the image so they could take a closer look, allowing them to pick out specific elements, like the height of the waterfall, that would let them triangulate the location from chunk seeds, from which the world seed could be reverse-engineered. As of July, the chase was still on, until now.

Today, SalC1 tweeted out what definitely looks like an in-game screenshot of Minecraft, staring directly at pack.png in-game, with the caption “This is real.”. He’s working on a video that’ll provide everything anyone wants to know.

You can watch his July video here for the full process: