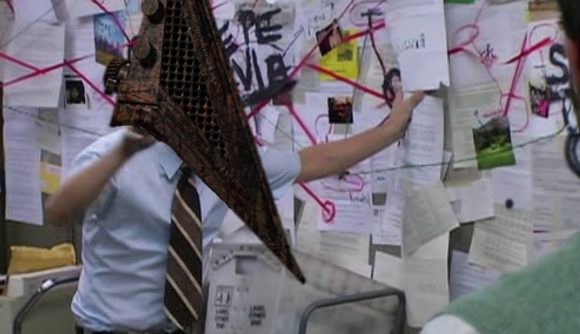 Konami has been upping Silent Hill’s social media presence, and fans of the horror game series are getting excited. A new Twitter account, and some cryptic tweets from Konami itself, has more than a few thinking we might finally get a substantial announcement for the iconic franchise.

Let’s start with Konami’s tweets. On July 31, the studio put up a video of the siren sound from Silent Hill 2, along with the caption “Close your eyes. Always scary. Silent Hill 2 siren.”. This caused quite a stir, many taking it as the start of some promotion or other. Not the case, follow-up tweets saying it was just some nostalgia from the social media team watching people stream Dead By Daylight, and that any genuine news would come from an event, or the official Silent Hill twitter.

The internet being the internet, everyone then went to the official Silent Hill twitter account, which was only started in July, expecting a further tease. They were met with an ad for a t-shirt, some fanart retweets, a link to the Silent Hill comics from IDW, and a few screenshots from Dead By Daylight. The disappointment rolled in like a thick fog.

Some are adamant this means something, proclaiming that a new game is definitely coming, or speculating that a remaster of Silent Hill 2 is in development. It’s the same clutching at straws that occurred earlier this year, when Hideo Kojima was teasing an announcement. Konami did comment that it was looking into ways to deliver the next Silent Hill game back in January, but that’s all we’ve definitively heard since.

Easy there internet. We were watching streams of Dead By Daylight and thought we would share the noise and feel of being hunted. We wont take the tweet down and “backpedal”, we just wanted you to enjoy it.

An official Twitter can be a good sign, like it was for Fable even after Microsoft shot down rumours, but it isn’t always indicative of anything major. Given that Silent Hill joined the Dead By Daylight roster this summer, bringing Pyramid Head, Midwich Elementary School, and Cheryl Mason into the asymmetrical multiplayer game, it seems likely Konami just figured it was time the series had a social medial presence of its own.

Nonetheless, famed Silent Hill composer Akira Yamaoka is keeping busy, working on a Cyberpunk 2077 spinoff anime for Netflix, and upcoming survival horror The Medium, which we got to see a little more of during the recent Xbox Games Showcase.