Ubisoft should have a big show today. We’re expecting a lot on The Division 2, more Beyond Good & Evil 2, and something big has been teased for For Honor. We also know that Assassin’s Creed Odyssey will be “revealed” during the show. I’m holding out hope for something Splinter Cell flavoured, too.

There’s also a string of games that are already out in the wild that could do with updates. Rainbow Six Siege (though that’s just been updated with the Para Bellum release) and Ghost Recon Wildlands.

If you’re trying to catch up on everything at the conferences, have a read of our comprehensive E3 2018 guide.

In untraditional style, the show opens in an alleyway behind the conference. And, er, there’s a band. Ok, this is the best show opening of E3 (except maybe Nintendo’s Direct where all the main speakers were recreated as puppets) – a man in a giant panda suit is dancing through the streets of L.A. and onto the stage.

It’s Just Dance. Of course it is:

The first game trailer of the night is Beyond Good & Evil 2 and it is a truly beautiful CG trailer, showing a ship where pig man Pey’j is working as a cook, and is ambushed by a ship piloted by Jade. A younger Jade but it is the protagonist from the original game.

There was also a brief Beyond Good & Evil 2 gameplay trailer showing Ganusha city.

Actor Joseph Gordon Levitt came on stage to announce that you can get your art, music, and writing into Beyond Good & Evil 2 through his collaborative company Hit Record.

This was followed by the news that Rainbow Six Siege’s player count is now over 35 million players and Ubisoft will be putting out a documentary that follows some of the game’s biggest esports players.

This was followed by Trials creative director Antti Il Vessueo arriving on stage like this: 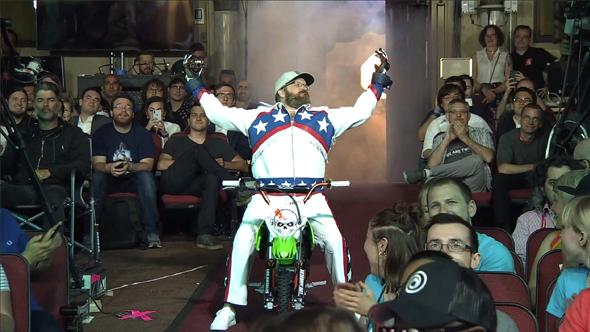 He was announcing Trials Rising, a new and similarly bombastic racer. It looks like a lot of silly fun and, when it’s being promoted by a guy dressed like that… I’m sold.

This was immediately followed by a new cinematic trailer for The Division 2. It’s grim, with dead deer floating in stagnant water, civilians being executed. Watch it below:

Creative director Julian Gerighty came on stage and announced that The Division 2 will have raids and that in its first year after launch will be receiving three title updates – all of them will be free. This is a big shot across the bow of Destiny 2.

How do you follow that? Mario + Rabbids: Kingdom Battle, of course. Unfortunately, this delightful strategy game isn’t coming to PC, so I’ll just show you the on stage musical number:

This is swiftly followed by Skull & Bones, Ubisoft’s 5v5 ship-em-up. We’re shown agorgeous cinematic trailer establishing the stakes of the game – pirates versus the empire – also, and hopefully this isn’t just something to show off, there is a huge storm on show.

Creative director Justin Farren comes on stage to introduce a gameplay video and explain that, yes, those cataclysmic weather events will be in the game. Just look at this storm: 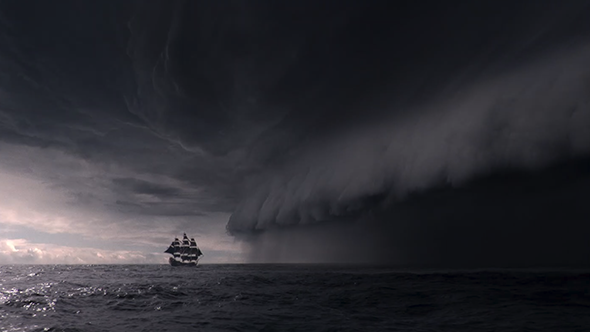 This gameplay footage looks nuts, the ship combat is very Black Flag, but there is also a shipyard where you can harbour multiple ships and customise them with loot and gear. You ships can unlock special abilities and, well, it all looks like a lot of swashbuckling fun.

Following the boats was Elijah Wood with Transference, his FMV game. It’s no longer VR. It looks creepy so check out the trailer below:

Next up is Starlink, the toys-to-life game for Switch. I’d love to see this come to PC but there doesn’t seem to be any hint of that yet. I mean, it has Starfox in it, so, er, it seems unlikely that it will be coming to PC. It apparently will be coming to the other consoles so maybe there is hope for PC yet.

Ok, back to PC games – creative director of For Honor Roman Campos-Oriola takes to the stage to announce that the starter edition of For Honor is being given away for free on PC for the next week. This then rolls straight into a trailer announcing Marching Fire, a new season of content with new heroes and also a new mode that will see you trying to breach your way into a castle. It looks amazing, as you can see in this new trailer.

That’s then followed by The Crew 2, which continues to look colourful and fun-ish:

Now onto the good stuff – the Assassin’s Creed Odyssey reveal trailer. You’re not playing an assassin in this game (odd choice) and instead you’ll pick between Alexios and Kassandra, the child of Leonidas. You’ll carry his broken spear into battle. As well as having one of these set characters you’ll have dialogue options for one of the first times in an Assassin’s Creed game, moving it towards a more traditional RPG.

This was then followed by a full eight-minute walkthrough video. We learn that there are a whole webs of upgradeable skills, naval combat, horse riding, your own eagle, and same-sex romance options. And then, right at the end, it’s only the bloody Minotaur.

Ok, that’s everything I wanted from Odyssey – fantastical creatures. I am well up for fighting the Minotaur, sailing my ship between Scylla and Charybdis, and, fingers crossed, taking on a cyclops.

That’s all for the show and there’s lots to chew over. While the show going on Ubisoft was posting tons of videos showing gameplay so we’ll now get to poring over those looking for new details.