Looking for a beginner’s guide to Diablo 2 Resurrected? It’s been over 20 years since Diablo 2 launched, so it’s completely understandable if you don’t remember every little detail about the RPG game. Though Blizzard has done a great job remaking Diablo 2, there are certain aspects of the game that haven’t stood the test of time. Who might’ve guessed that a game named after the devil could be so unforgiving?

It’s easy to spend your valuable skill points only to discover halfway through the game that you’ve created a terrible build. There are important mechanics you should consider before venturing off into battle, like the fact you can only respec your character a limited number of times per playthrough. Not sure which class to pick? We’ve got builds on the Sorceress, Druid, Necromancer, Barbarian, Paladin, and Assassin – take your pick!

Whether you’re a returning Diablo player looking for a quick refresher, or you’re a complete newcomer to the series, these tips should be helpful at the start of the game. We’ll have you ready to send Diablo and his minions back to Hell before you get the chance to pick a Diablo 2 class.

Outside of combat, you’ll spend a lot of time in Diablo 2’s inventory menus. You can speed up the selling process with the new quality of life tweak that allows you to instantly sell an item at a store. Control and left click on any item in your inventory to sell it to a merchant. You can save plenty of time with this handy little shortcut, sparing you minutes each time you finish battling demons.

There’s another merchant-related shortcut you can use to purchase multiple items in one click. Shift and right click allows you to purchase a stack of items. This is handy when purchasing scrolls for your tombs as it allows you to buy 20 scrolls in a single click. You can also add items directly to your belt by pressing shift and left click.

Finally, use alt to display all of the items dropped on the floor. This is crucial as it allows you to see every item on the screen, giving you the freedom to be more selective about what you pick up. At the beginning of the game, most players pick up any old trash as they can sell it on, but this slows down drastically once you start to find better loot. 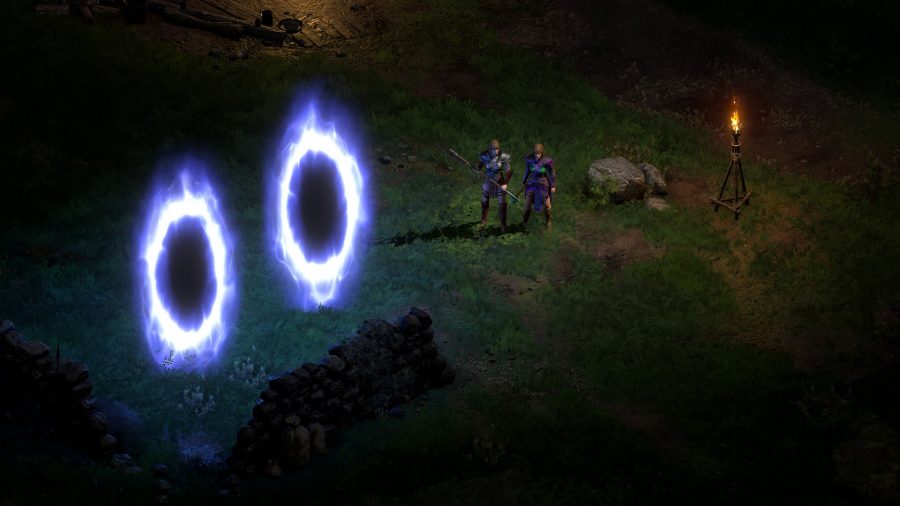 The scrolls of identify and town portal are going to be two of your most used items in Diablo 2, right next to potions. Once you unlock access to the vendor in Act 1, purchase a tomb of identity and town portal right away. These tombs allow you to store up to 20 scrolls in each vessel, saving you plenty of inventory space. The tombs should become a mainstay of your inventory throughout the game, likely occupying the same space from beginning to end.

Don’t forget about your mercenary

Diablo 2 doesn’t spend much time highlighting what mercenaries are and how they can be used effectively. In almost every act, there are mercenaries that can fight alongside you for a price. In Act 1, Kashya rewards you with a Rogue mercenary after completing the Blood Raven quest. Mercenaries fight with you until they die, and they can die pretty quickly if you aren’t paying attention to them.

While this may sound like a burden, mercenaries can be extremely useful, especially for solo players who might need a helping hand. You can equip mercenaries with the same type of equipment and weapons you might use. Improving your mercenary’s gear is the easiest way to improve their survivability – if you want your AI companion to tank damage for you, you’re going to need to share your loot. You can even give your mercenary potions directly from your belt by holding shift and pressing the corresponding hotkey. 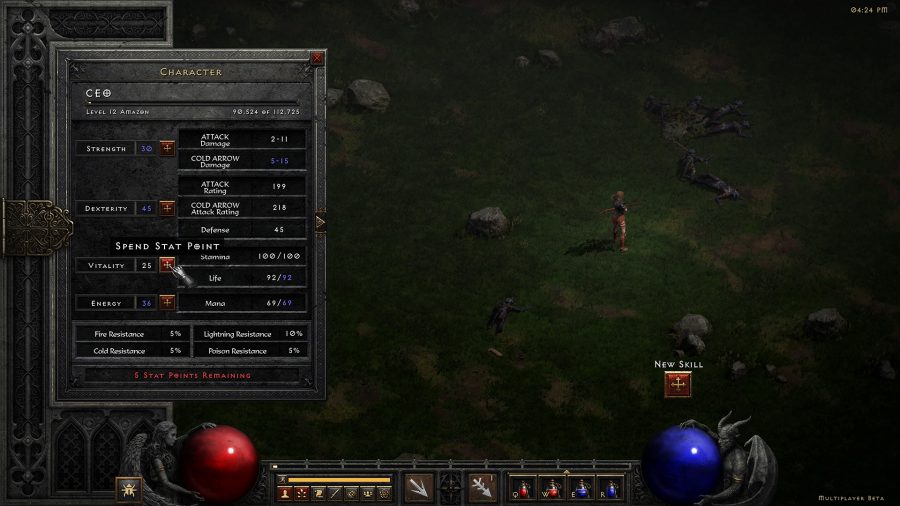 The devs implemented a number of important quality of life changes to Diablo 2 Resurrected, but the ability to respec at will isn’t one of them. That’s right, if you want to respec your character, you only have one opportunity to do so throughout the entire game. After completing the Den of Evil quest in Act 1, Akara gives you an opportunity to reset all of your skills. This opportunity occurs once per difficulty.

It’s important that you spend your skill and stat points wisely as you can only fix your mistakes once. It’s worth following a build guide to ensure you aren’t wasting any of your precious points. Diablo 2 Resurrected lets you take your character to a higher difficulty, but you won’t survive if your points have made you too weak to fight against the monsters.

There’s an alternative method that allows you to respec at will, but it requires you to reach the endgame content on Hell difficulty. This involves defeating each boss across all five acts – chances are if you’ve made it this far, your build can’t be that bad.

Feel free to experiment with your class

Okay, so you know how we just said you should spend your skill points carefully? If you’re only planning on playing through the game once on Normal difficulty, don’t be afraid to experiment with your build. Diablo 2’s starter difficulty doesn’t require you to create the most optimal build – you can get away with wasting some points if you want to try something new.

We don’t think it’s possible to create a build so bad that you can’t complete the game on normal, however, this is definitely something you can do on Nightmare and Hell. Use Normal as a playground for your creativity, but if you decide to kick the difficulty up a level, it might be a good idea to follow a build guide instead.

Those are all the beginner tips you need to get started in Diablo 2 Resurrected. Don’t forget to check out our massive guide on Horadric Cube recipes to see all of the items you can combine together. Want to take on a different challenge with your mates? Take a look at our list of the best co-op games on PC to get you started.