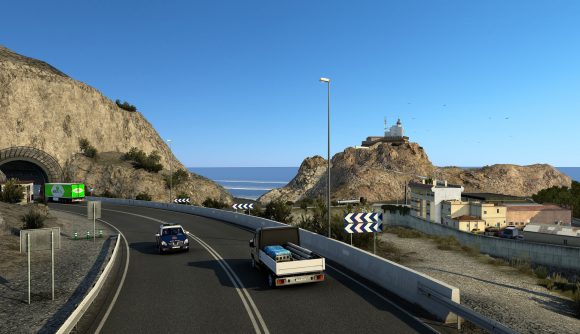 Players of Euro Truck Simulator 2 were just waiting to visit Iberia. the truck game‘s new DLC pack has landed in this week’s Steam top sellers list, and it has some strong company.

Iberia is the first new region since developer SCS Software spruced up Euro Truck Simulator 2’s lighting in update 1.40. Exploring the Iberian Peninsula should give drivers plenty to gawk at as we wait for more on the Heart of Russia DLC that’s next. Elsewhere on the Steam top sellers chart, Halo: The Master Chief Collection, Sea of Thieves, and Forza Horizon 4 have re-entered, at sixth, fourth, and third, respectively.

Forza Horizon 4 featured twice the week it debuted, and looks like players are still coming around to the racing game‘s Steam version. Valheim drops again, from fourth to seventh, after an eight week stretch at first, and The Binding of Isaac: Repentance hangs on at tenth, falling from third. Horizon Zero Dawn moves up one, from sixth to fifth, and It Takes Two is still in second, players taking full advantage of the friends pass for co-op game fun.

Outriders maintains first place, despite continued issues. Currently, players are suffering a glitch that’s wiping their inventories and rendering progress inaccessible. Developer People Can Fly is working on it, and hopefully a solution isn’t far off.

We have a list of games coming out this month you should look into, and another more general list of new games besides, if you want more suggestions.