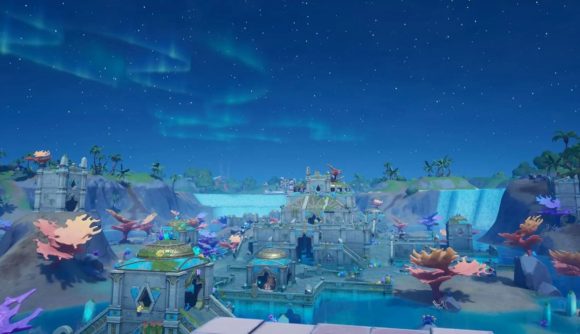 Atlantis, the sunken city, has been discovered in Fortnite. After the water levels rose to kick off Fortnite Chapter 2 Season 3, they’ve been gradually falling, now revealing the battle royale game‘s equivalent to Atlantis.

The Fortnite location is called Coral Castle, a landmark full of ancient statues and architecture that’s covered in seaweed and coral, flanked on all sides by waterfalls. One main building at the center holds a number of chests, and likely quite a few secrets in the various passageways, while several smaller huts and houses are scattered around otherwise. You can find it near the plane crash site, north of Sweaty Sands.

Players expected something resembling the underwater empire would eventually appear. DC’s Aquaman was added as a Fortnite skin in July, and according to Fortnite Insider, data-miners had found information suggesting that an Aquaman Atlantis place-of-interest was on the way. The lowered water levels has uncovered other areas, like Slurpy Swamps, now fresh from the prolonged bath, and the little ship near Craggy Cliffs, too. If you walk up to the vessel, called Ancient Astronaut, you’ll get some challenges.

This summer’s been a big one for the multiplayer game. Fortnite hosted screenings of some Christopher Nolan movies in June, not long after the island was submerged, and then left Steam early access. Following that, the building game’s held some panels on racial injustice in America, further expanding the range of events the free game offers players.

We have guides on how to drive cars in Fortnite, and how to tame a Fortnite shark, if you’re feeling brave. The Fortnite Season 2 Chapter 3 end date will arrive in august.