Want to know where to get the Grab-Itron in Fortnite? Yet another alien weapon has appeared in Fortnite Chapter 2 Season 7, and this one acts a lot like the traction beam from the Fortnite UFOs. Known as the Grab-Itron, its main function is to pick up vehicles, grenades, shots from explosive weapons, and even enemy players. When you’ve picked up an item, you have the choice to either keep hold on to it or fling it at an opponent.

Speaking of grabbing things, there’s more than a few things to grab this season, such as the many Fortnite alien artifacts that you can use to pick up new Fortnite Kymera styles. You don’t have all that long to get all of these, and you likely need to team up with other players to get the Fortnite cosmic chests.

But back to the main question that you probably have right now: where can you even find the Grab-Itron in Fortnite? There’s only a limited number of places where you can nab one for yourself, so we’ll be going over every single one here. Once you have it, there’s only a limited number of things you can pick up with the Grab-Itron, so we’ll also go over what you can do once you have this potentially powerful tool.

Here are the places where you can find the Fortnite Grab-Itron:

Rather annoyingly, the abductors seem to keep coming and going this season, so you may need to wait a while before you can find one on board the Mothership. 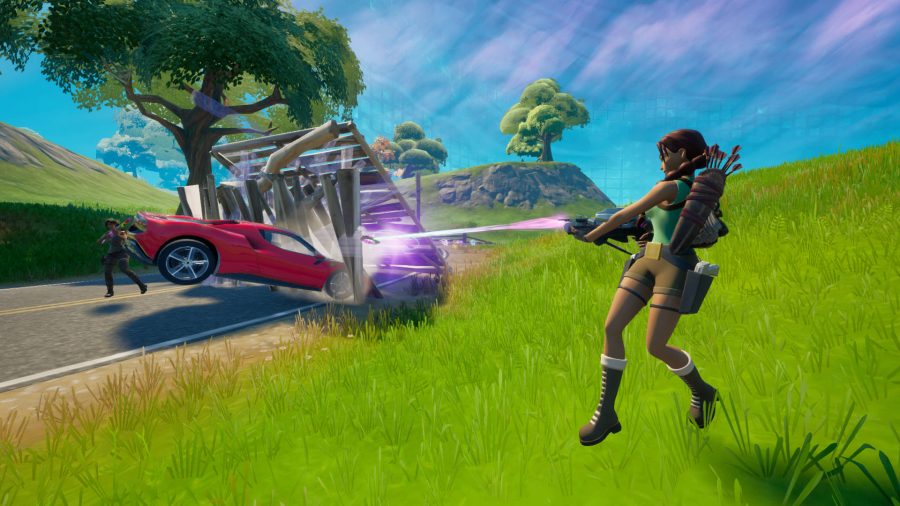 How to use the Fortnite Grab-Itron

You have this powerful alien weapon, so how do you even use the thing? You should be aware that it can only grab certain objects. These include cars, boats, UFOs, any active explosive weapon like a thrown grenade or a fired rocket, and player characters. This can’t be used to pick up Fortnite NPCs as a human shield, rip out enemy fortifications, or lift anything else that’s fixed into place.

We don’t really recommend picking up an opponent with this, unless you are very quick at flinging them far away. In fact, the larger the vehicle, the more damage you can do when you eventually yeet it at your opponent, so keep an eye out for trucks or UFOs. Thankfully the grabber part has a long range, so you can pick up vehicles from far away.

Instead, reserve flinging the object for whenever your opponents are hunkering down in built up fortifications, or hang on to it as a defensive shield until it runs low on health, then chuck it at your enemy as it explodes.