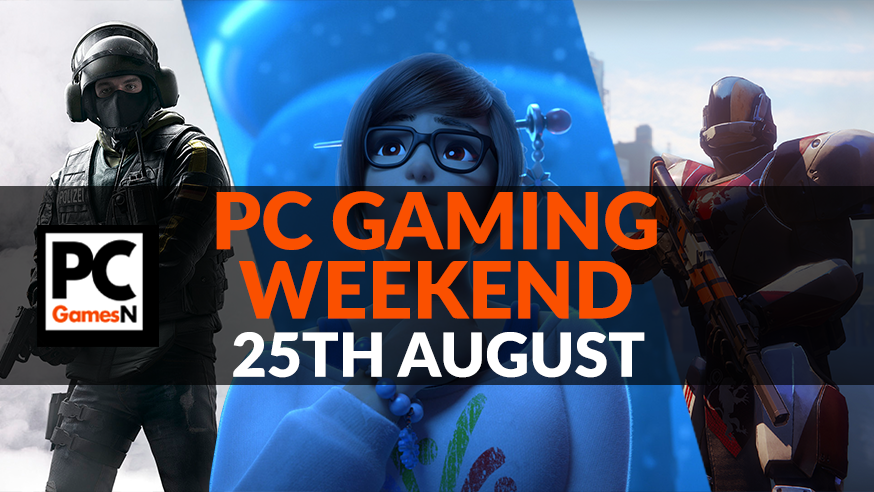 Now that Gamescom 2017 is calming down, it’s time to stop watching cinematic trailers, getting excited about game announcements, and fussing over the tiniest details hidden away in new screenshots. You know what you should be doing, right? Uh huh, it’s time to actually play some damn PC games. Below is our recommended way to spend your time in front of your keyboard and mouse this weekend.

Grab your free pack of goodies for Robocraft – we have 10,000 codes to go!

We have a huge giveaway for you to be a part of right now. Robocraft came out of Early Access after three years and stands tall as a robot building and fighting game. To celebrate its arrival, we’re giving away Starter Packs full of goodies. 10,000 of them, in fact – so you should be able to snatch one up.

If there’s one game that rules supreme during lunchtimes in the PCGN office it’s Rainbow Six Siege. If you haven’t played it yet, you can find out why we keep forgetting to eat food when we should as it’s free on Steam right now, and has a discount if you want to buy it in full.

It’s coming. It’s coming! The Destiny 2 beta kicks off on PC next Tuesday. Yes, we’re very close. To get ready for that exciting day, you can now pre-load the beta on your machine. Go do that, then read the article linked above for an idea of what you can expect in it.

Watch the latest Overwatch animated short – it’s all about Mei!

You should watch the latest Overwatch animated short this weekendEeven if you’ve already seen it. It’s really good, ok? It tells the story of Mei as she found herself along at a scientific research facility in Antarctica. It’s funny, it might make you cry, and it’s ten minutes well spent.

Who doesn’t love a bargain? This weekend both Bethesda and Rockstar are having a big sale over on Steam. Among the best deals on offer are Prey and GTA V at half price – definitely get ’em if you were thinking about it. There are also a bunch of classics to get for pennies.

Brink had a lot of new and interesting ideas to bring to the first-person shooter genre when it came out back in 2011. Never played it? Oh, well, maybe you should give it a shot now that it’s completely free to download on Steam. And it’s properly free, too – no microtranscations or any of that.

If Brink isn’t your thang then maybe Dirty Bomb is. This past week it got an entirely new Merc called Javelin. She’s a badass as she comes with a rocket launcher which, as everyone knows, is good for blowing things up. It’s time to go boom-boom.

You probably don’t need any encouragments when it comes to playing PlayerUnknown’s Battlegrounds, do you? It seems every PC gamer in the damn world is playing it right now. But this week saw the arrival of ShadowPlay Highlights. It automatically captures your best moments as you play. Now everyone can know about that clutch kill you got.

Oh look, here’s a new game you can play, at least, if you’re into hurtling a lightweight vehicle around a track at dangerous speeds. It’s F1 2017, of course it is, the latest in the racing sim series, and blimey, it looks like hot stuff.

Give Darkwood a go, a new top-down horror game just out of Early Access

Another new game? We know, you’re being spoiled. Darkwood is a top-down horror game that’s been in Early Access for a while but is now well and truly out of it. If you like to be spooked, and don’t mind a bit of lore to uncover as you do it, this is well worth a look.