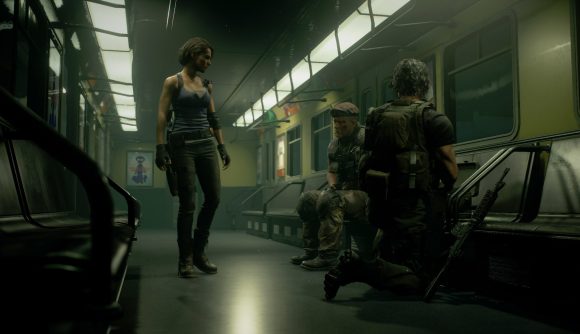 Adding itself to the long list, Resident Evil 3 has dropped Denuvo DRM. The horror game no longer has a limited on the amount of PCs that can activate it through an account.

The change hasn’t been officially announced by developer Capcom, but rather comes from the SteamDB change-log. The latest update, from October 1, reads “Removed 3rd-Party DRM – Denuvo Anti-tamper, 5 different PC within a day machine activation limit”. It’s unclear what, if any, specific issues precipitated this move, but given the ways Denuvo’s been known to interfere with performance it’s not unlikely some very noticeable game-altering quirk made it untenable.

Resident Evil 3 has dropped the software less than a year after Resident Evil 2 did it, which followed Resident Evil 7 cutting the package loose, and the survival games are part of a growing list that includes some of the best games around. Prey, Doom Eternal, and Devil May Cry 5 also got rid of it this year, and Batman: Arkham Knight, The Surge 2, and Hitman 2 removed the DRM add-on last year. No word on if Borderlands 3 is going to follow suit, but it’s probably a matter of time.

It’s almost as common for triple-A games to adopt Denuvo’s DRM or anti-cheat restrictions as it is for them to drop out. Back in 2018, Denuvo claimed one game lost over $20 million by not using it, something which no doubt entices executives who want to wring the most profit out of any given project, community backlash or not.

Next year we’ll have two new chapters in the Resident Evil franchise – Resident Evil: Infinite Darkness, a CG series coming to Netflix, and Resident Evil Village, the next mainline game. We suspect Denuvo’s more likely for one than the other, but you never know.