Looking for the best Warzone Oden loadout? There aren’t many Warzone guns capable of delivering a one-shot kill, but with Stopping Power Rounds the Oden is technically one of those. Many Warzone players have been sleeping on one of the best assault rifles in Warzone as it fires very slowly and has a lot of recoil, but if you can land your shots you’ll find yourself downing enemies with minimal effort. If you can find Stopping Power rounds then you won’t even need to worry about the follow-up shots.

The Oden has spiked in popularity recently after a number of prominent content creators have made videos showcasing the weapon’s frightening DPS potential, but it’s always been one of the most powerful pieces of kit in the battle royale game.

Our best Warzone Oden loadout will require some grinding to grab all of the best attachments, but once you’ve got them all you’ll be able to take down snipers with a quick burst of fire. The Oden does struggle in close-quarters battles, so we’ve also paired it with our best SMG in Warzone build.

The best Warzone Oden loadout is:

This Oden build will extend its range as far as possible and improve its aim down sight speed so you have a relatively mobile weapon for quickly ducking in and out of mid to long-range engagements. 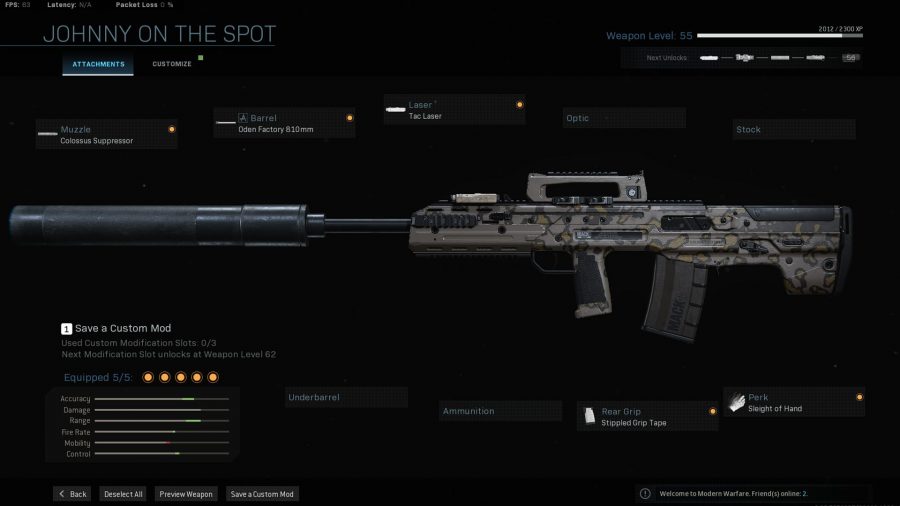 Most Warzone Oden loadouts tend to feature an extended magazine, but we opt for Sleight of Hand. The larger magazines don’t put many more rounds in the magazine, but come with heavy penalties to aim down sight speed and mobility. With Sleight of Hand the reload speed of the Oden’s standard 20-round mag is barely over a second, and when you consider the Oden will drop most enemies in a maximum of five rounds, 20 rounds should really be enough.

We also don’t advise bringing an optic for this build, although we appreciate you may want to equip something for long-range vision, so if that’s you then take the VLK 3.0x Optic in place of the Tac Laser. For us, however, the iron sights for the Oden are pristine, allowing superb vision at all but extreme distances.

To flesh out this build you’ll need a close-range option: we suggest our best Warzone MP7 loadout as it shreds up close, is highly mobile, and has 60 rounds to play with.

Your perks should be EOD, Overkill, and Amped. EOD will save your hide from being instantly sent to the Warzone gulag by an errant RPG. Overkill gives you your two primary weapons, but you should swap to Ghost when you can acquire a second Warzone loadout drop. Finally, Amped lets you swap weapons faster, which is important for pushing enemies you’ve already hurt with the Oden.

Finally, we suggest C4 as your lethal equipment, and either Heartbeat Sensor or Stun Grenades for your Tactical option.