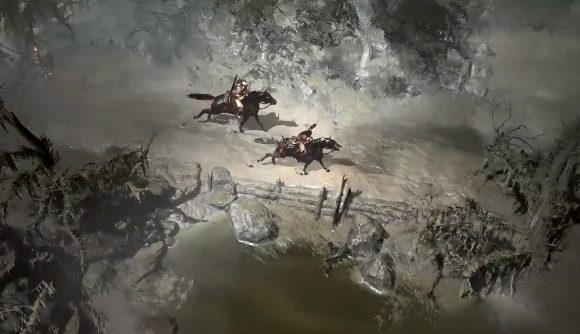 Blizzcon 2019 has brought with it the first official look at Diablo IV, and the gameplay trailer for the title revealed a number of exciting new details about the project. Aside from the first character classes coming to the game, we also got a first look at some of the gameplay possibilities, and the fact that Diablo IV is set in a non-linear “contiguous” open world.

The team took a “very Diablo” approach to mounts, both referring to appearance and gameplay. For starters, mounts will be customizable. Players can change armour pieces, saddle, hanging trophies on the side of the horse – such as monster heads – and, of course, the type of mount too. Mounts shown included flaming demon horses, skeletal ghost horses, and more.

All this customization affects the gameplay, too. Mounts can be equipped with armour and items that allow them to go faster, or decrease the damage you take while riding them.

Players don’t simply use the horses to ride around quickly and then get off, as each class has different dismount abilities. The Sorceress, for example, has the option to turn into an ice storm and freeze everything in your mount’s path. The Barbarian, on the other hand, can simply leap off the mount and immediately go into battle.

There’s no word yet on whether players will be able to actually fight while still riding the horses, or whether mounts can be killed. We also don’t know if there will be non-horse mounts in the game, either. Diablo IV isn’t coming out anytime soon, anyway, so there’s plenty of time to find out.