The five-star Hydro catalyst wielder shares many similarities with Barbara, but there could be room for Kokomi to be more than a healer. Looking at Kokomi’s abilities, she may surprise people with her elemental skill damage, which scales based on her max health. If the latest rumours are true, Kokomi’s healing abilities may be essential in the next update. Skip the paragraph below if you don’t want any spoilers for potential upcoming enemies.

Genshin Impact hasn’t needed healers for some time, but a recent leak points towards a powerful monster that can inflict bleeding on an entire team. If this monster is coming to the overworld, there’s no doubt it’s going to join the Spiral Abyss too. This single enemy could cause a massive shake-up on the Genshin Impact tier list as healers become essential once again.

Kokomi has been designed as a support character first and foremost, so we’ve centred our build around her healing abilities. The best catalyst for Kokomi has to be Prototype Amber, which features two powerful abilities when she activates her elemental burst. You can see Kokomi’s abilities in action over on the official Genshin Impact website.

Prototype Amber regenerates four energy every two seconds for six seconds, making Kokomi’s ability cheaper. During this time, the catalyst’s second effect heals all party members 4% of their health every two seconds. Pair this weapon with the four-piece Tenacity of the Millelith artifact set to turn Kokomi into a healing machine. Kokomi’s elemental skill scales with her max health, and that is taken further with the two-piece effect which buffs her health by 20%.

The four-piece effect also ties in with her elemental skill, increasing the attack of all nearby party members by 20%, as well as their shield strength by 30% for three seconds. This effect can be triggered once every half a second, and it can occur even when Kokomi isn’t on the field. It won’t be difficult to get the most out of these powerful effects as they synergise perfectly with Kokomi’s game plan. As the party’s only healer, Kokomi wants to activate her elemental skill or burst and immediately switch out to a damage dealer. 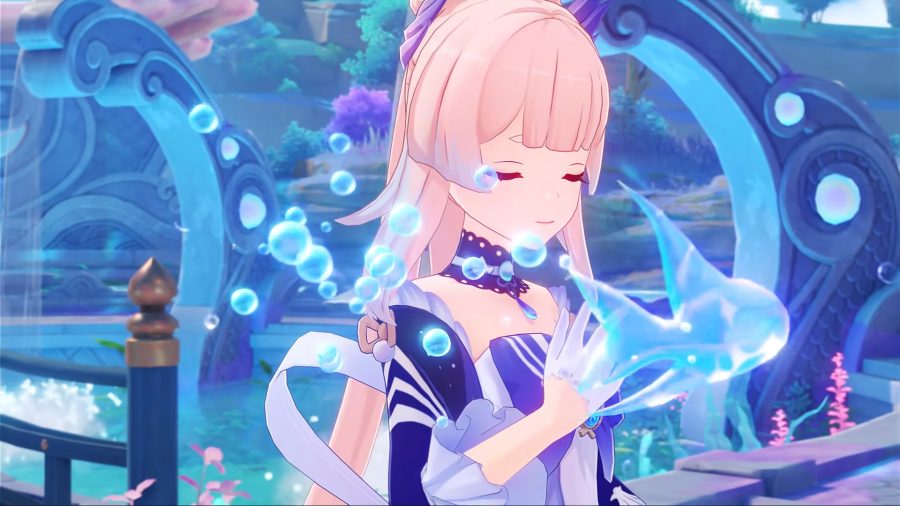 Kokomi’s elemental skill causes the wet status effect to any enemies she manages to hit. Our Genshin Impact energy resonance guide breaks down all of the elemental reactions available – we want to focus on electro-charge. Raiden Shogun is perfect for triggering electro-charge, and unlike a lot of support characters, she has to be active on the field to deal the most damage. Alternatively, Electro Traveler can also fill this role if you don’t own the Vision Hunter.

Kazuha is one of the best main DPS characters to pair alongside Kokomi as he can activate the swirl elemental reaction and deals lots of damage on his own. A cheaper alternative would be the four-star Sucrose, who can group together enemies using her Anemo abilities. Raiden Shogun’s elemental skill pairs well with Kazuha, providing him with a strong damage buff to eliminate enemies even faster. Finally, Sara completes the party in the battery role by providing the entire team with loads of energy to burn through.

And that’s everything you need to create the best Kokomi build in Genshin Impact. Have you had a chance to read our Genshin Impact fishing guide yet? If you catch enough rare fish, you can unlock The Catch, a special four-star polearm. Also, don’t forget to check out our guide on Genshin Impact codes to claim free primogems, mora, and more.