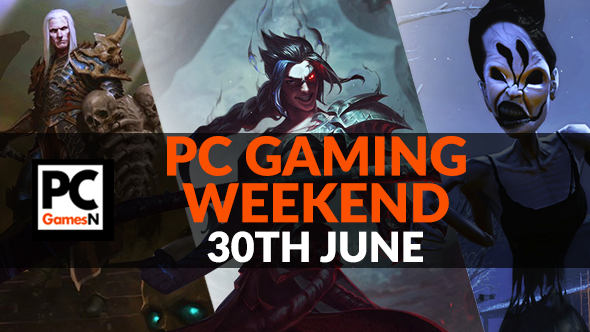 It’s a good week to be a PC gamer. Not only did two of the most-loved PC games get new characters to play this week, some of the biggest games of the moment have had updates to entice you back in. This is your PC gaming weekend and there’s plenty to keep you busy.

There was a lot of announcements this week so make sure you’re on top of them with the latest PC games news.

As always, the point of the PC gaming weekend is to make sure you get the most out of your two days off. We’ll run through some of the new events and activities you can get involved in, getting that precious experience, and having a good time while you’re at it. Without further ado…

Win a copy of horror-shooter Dead Effect 2 VR – we have 20 copies to go!

If you own a VR headset then we have just the giveaway for you. We have 20 Steam keys for Dead Effect 2 VR to give to our lucky winners. It’s a game that has you stomping around the infected corridors of a space station, cutting off zombie heads with katanas, and blasting them with crossbows and explosives. If you want a copy make sure to enter out competition.

This week saw the introduction of1v1 Duel Tournaments in medieval sword battler For Honor. But not everyone has access – currently, these tournaments are only available in the game’s Public Test Server. If you do have access then you can enter and start pushing your rank up. Better get some practise in, eh?

Spash around in Call of Duty’s Days of Summer event

As the summer is officially here, Activision are holding a Days of Summer event for Call of Duty: Infinite Warfare and Modern Warfare Remastered. It’s all a bit ridiculous, with beach balls floating about and soldiers running around with sunscreen on their nose. At least Infinite Warfare has got a free map.

If you’ve been trying your best to get through World of Warcraft’s latest and hardest raid Tomb of Sargeras then, hey, take a break. Chill out by watching some of the best WoW players tackle it themselves, each of them racing to be the first one to come out the victor. You might pick up some tips along the way, too.

Ubisoft rolled out an update for Ghost Recon Wildlands this week. Not only does it raise the level cap to 30 – you’ve got an excuse to sink more hours into shooting up drug pushers – it also adds an entirely new mode to the game. It provides a new difficulty along with plenty of new rewards, so get on that!

One of the most exciting things to happen this week was the introduction of Kayn and Rhaast to League of Legends. While that does read like it’s two new heroes, it’s actually one – a dual hero. Kayn is a master of dark magic and, as such, wields a scythe called Rhaast. Only problem is that he has to battle Rhaast for control of his body. Yikes!

Win a ticket to BlizzCon by playing Heroes of the Storm

Blizzard fan? How’d you like to head over to BlizzCon for free this year? That’s right, you can win an all-expenses ticket to Blizzard’s flagship event and all you need to do is play Heroes of the Storm. Well, almost. You actually need to compete in the new 5v5 brawl and come out on top. Make sure you don’t miss this opportunity.

Smash your way through Diablo III with the new Necromancer

Ah, Diablo III, my darling. Wher have you been? If you stopped playing Diablo III for a while then get ready for that time to come to an end. You’re going to want to head back in now that the new Necromancer has been added to the game. You’ll have to pay for them, yes, but the Necromancer is a nasty piece of work, so it should definitely feel worth the coin.

Join in as Elite: Dangerous players uncover the Thargoid base

This should be of interest whether you’re an Elite: Dangerous player or not. Turns out that, this week, a bunch of players were able to track down the final Thargoid base and have started figuring it out. Many of them are livestreaming it, so you can watch along, or, if you are a player, join in yourself. There’s plenty of new stuff to see.

Try out the rebooted MMO The Secret World Legends

Remember Secret World? It’s that MMO with a contemporary setting in which you hunt down creatures from urban legends. It went away for a while but now Funcom have relaunched it, if you fancy hopping back in, or to try it out for the first time. The original game is in there along with new Nightmare Dungeons. Even better: in the near-future, it’ll be getting the addition of the city of Tokyo.