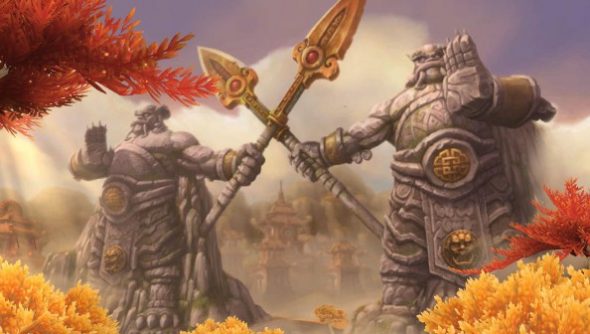 Welcome to another edition of the PCGamesN, our weekly roundup of what’s happened this week, what’s happening this weekend and more. Hope you like Pandaria, prison architecture, and magic-assisted assassinations!

More tanks in World of Tanks 8.0

The week that was

Pandaria! Did it finally arrive, or has it always been, and we are the ones who have only now arrived at its mist-shrouded shores? Does Tim dream himself a giant elk, or does the giant elk dream himself Tim? And how the hell could these people have leveled so fast. We talked to the masters at Blizzard to see if they they could explain the Way to launch an MMO expansion.

We continue to learn lots about Call of Duty, including its kinder, more team-oriented approach to streaking and prestige levels.

Excitement for Dishonored is reaching a fever pitch. Cartoons in three parts! Everything we know about Dishonored! Arkane show us how it is done.

Introversion and Prison Architect have been in the news a bit. They created a tiered, paid-alpha to help finance development. Sales went crazy, and then we played it!

We sailed the seas of Assassin’s Creed 3 and still found time to assassinate some people. Also, the first AC3 level models.

You may not realize how much people love Minecraft until you look at all these references and tributes in other games.

We talked to David Ting, the head of the IGN Pro League, about the future he envisions for IPL and eSports as a whole.

DreamHack Valencia was rather good.

The finest GSL matches are now on YouTube, so enjoy some elite StarCraft 2.

No GFW Live in Steam release of Mark of the Ninja

I don’t know how I feel about this: Rome 2’s budget is 40% bigger than any other Total War’s. No wonder.

We’re getting Beneath a Steel Sky 2 thanks to the Broken Sword Kickstarter.

So long and safe landings, people of PopCap Dublin.

The Secret World gets a new director.

We learn more about Diablo 3 PvP

3D Realms want to make another game, which makes sense. They clearly like making games. Finishing them is another matter.

Zynga will buy you or clone you, apparently.

Notch is seriously not a Windows 8 fan, you guys.

Ubi Montreal concede that Far Cry 2 was a bit static.

Legendary drop rate in Diablo 3 increased. I will uncomfortably ponder how much this sounds like fine-tuning a slot machine.

Here is everything we know about Aliens: Colonial Marines.

We spent some time with the new SimCity.

CS:GO gets a big update tomorrow.

IsoChronus is a cool, indie tower defense game that involves mastering time itself.