Want to know more about the Genshin Impact Eula banner? Eula is a five-star Cyro based Claymore user, one of the most deadly combinations we’ve seen in the game for some time now. This Cryo character is a burst damage dealer, making her deadly against single target bosses with large amounts of health points.

As the captain of the Knights of Favonius Reconnaissance Company, Eula is an important part of the organisation that works to protect the people of Mondstadt. It remains unclear why Eula, a descendant of the ancient nobles, would want to join the Knights of Favonius in the first place. Mihoyo did, however, go over some of Eula’s abilities in the 1.5 livestream event.

Judging by Eula’s abilities, it appears she may be powerful as both a support and DPS character. We have no doubt that she’s going to place highly on our Genshin Impact tier list if her abilities remain untouched from the beta. She will arrive in the 1.5 update, but you can already play as the new Pyro Catalyst, with our best Yanfei build.

Eula will arrive at some point in the 1.5 update after Yanfei, two of the latest Genshin Impact new characters. There is no set release date for the Genshin Impact Eula banner, which is called Born of Ocean Swell. It’s likely that the banner won’t appear until the Gentry of Hermitage banner ends on May 18. 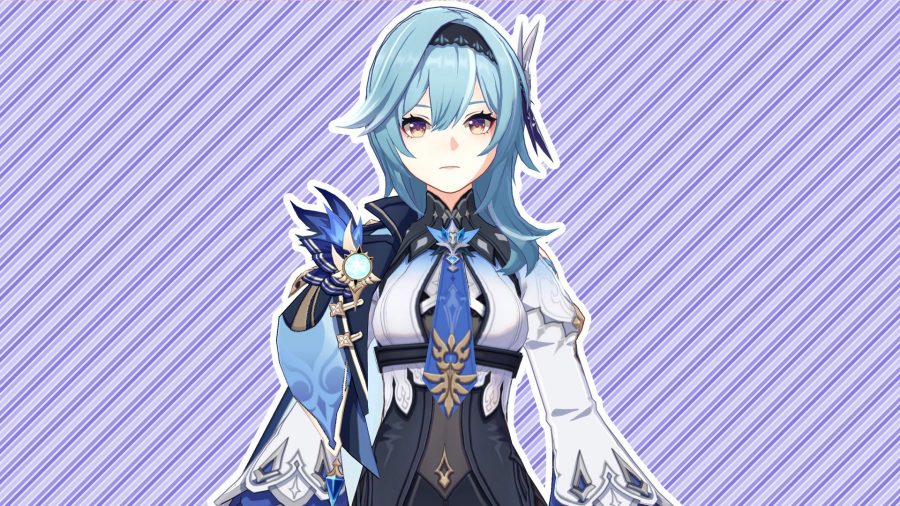 Though Eula is a Cryo based character, it looks like she behaves similarly to Razor, the Electro based Sword character. Eula primarily deals physical damage when attacking, meaning she isn’t focused on chaining elemental reactions. We can also assume that Eula is a solo DPS character, given that her abilities stop working once she has been switched out.

Fischl not only works well with Cryo characters thanks to Electro and Cyro elemental reactions, she doesn’t have to be active on the field to have an impact. Utilise Fischl’s night raven Oz to deal extra damage while Eula focuses on single targets instead. Zhongli is also worth considering thanks to his powerful Jade Shields ability that can keep characters alive during crucial moments.

Again, it’s tricky to say exactly what Genshin Impact artifacts and Genshin Impact weapons work best with Eula without seeing her in action first. Similarly to Hu Tao’s unique polearm, Eula could receive her own four-piece artifact set. The Pale Flame artifact set boosts physical damage by 25% with two pieces, and greatly increases attack power with four pieces. There is also the Song of Broken Pines claymore coming to the 1.5 update that she can wield.

Eula’s abilities are available on Honey Hunter World, so we now have a good idea of how she’ll perform.

Grimheart is a mechanic unique to Eula – each stack increases Eula’s defence and resistance to interruption.

Upon activation, Eula’s greatsword deals Cryo damage to nearby enemies and creates a Lightfall Sword that follows her around for a certain duration. While in this form, any of Eula’s normal attacks, elemental skills and elemental bursts that deal damage to opponents will charge the Lightfall Sword through energy stacks once every 0.1s.

And that’s all we know about the Genshin Impact Eula banner so far. Be sure to keep an eye on this page as we’ll be updating it as new information becomes available. In the meantime, check out our Genshin Impact hangout guides on Barbara, Noelle, Chongyun, and Bennett to see every ending available for each of these characters.