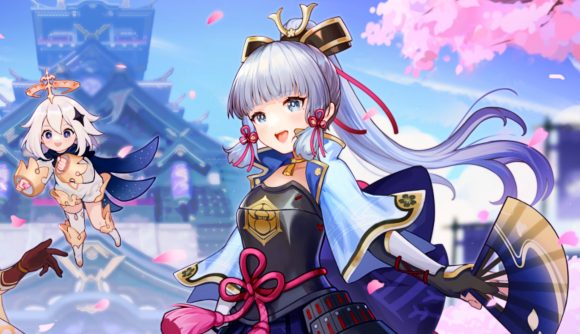 Hoyoverse has posted an update on the Genshin Impact 2.6 events schedule which sees the Genshin Impact Ayaka banner extended indefinitely. Genshin Impact 2.7 still has no set release date after the open-world game’s next update cycle was recently delayed. No official reason has been given for the delay, although COVID-19 restrictions in Shanghai, where Hoyoverse is based, could be causing issues. In the meantime, players will have more chances to wish for the sword-wielding five-star Cryo character Kamisato Ayaka.

There is currently no set end date for the current Genshin Impact banner ‘The Heron’s Court,’ which also increases the chances of the four-star characters Rosaria, Razor, and Sayu. Hoyoverse says that the in-game countdown (which at the time of writing lists the banner lasting for 240 days) is not the definitive end date and that players should wait for future announcements for the banner’s end.

The ‘Epitome Invocation’ weapon banner will be running for the same period as well, having also been extended indefinitely. This allows players the chance to wish for the event exclusive five-star weapons Mistsplitter Reforged and The Unforged. Much like The Heron’s Court banner, this banner’s end date will likely be adjusted once a fixed release date for Genshin Impact 2.7 is announced.

Two other Genshin Impact events will be running during May as part of the Zephyr of the Violet Garden phase III event schedule. The ‘Overflowing Mastery’ event runs from May 22 – 29, offering double talent rewards from talent level-up zones. The ‘Spices from the West’ event runs May 14 – June 7, rewarding players with various resources including Primogems, Hero’s Wit, Mora, and weapon ascension materials for helping Nazafarin to make special seasonings.

While the Genshin Impact 2.7 release date is still up in the air, players of the free-to-play game will at least have some things to focus on in the meantime. We’ll keep you posted on any further updates regarding the next major update, which is expected to feature new Genshin Impact characters Yelan and Kuki Shinobu.

In the meantime, we’ve got guides on the best Genshin Impact builds for each character along with a Genshin Impact hangouts guide, so you’ll be well equipped to make the most of your adventures.