Diablo IV had everyone at BlizzCon 2019 buzzing, and for good reason. Demo play showed off the action RPG’s dark horror aesthetic, new open world, and the return of an iconic class from Diablo’s earlier days: the druid. The bad news? There’s no Diablo 4 release date yet. The good news? So far, it’s a lot of fun to play.

Let’s be honest: it’s still early days for this game. While there’s a better chance that it’ll make the 2020 holiday season than Overwatch 2, I’ll be pleasantly surprised if that’s the case, especially given how extensive the game’s open world is supposed to be and the playable classes we have yet to see. That said, the gameplay already on display is encouragingly solid, and a gory good time.

During my time with the game I play all three of the available classes in the demo: barbarian, sorceress, and druid – two more will join the game at launch. Of the three, the druid is far and away the most fun, in part because it’s the first time we’ve had once since Diablo II, but also because he is wildly overtuned compared to the others. The only time I worry about my health is during boss fights, and the few potions I pick up along the way there are more than enough to keep me in fine fettle ‘til the end.

The Diablo 4 druid class automatically changes forms depending on the abilities you use. Turn into a wolf-man and slash, turn into a bear and charge through your enemies, or stay in caster form and rain down crackling lightning upon anyone who’s near – all three forms are a hoot, and it’s a testament to the character design folks that each feels equally attractive to play. The abilities come off as incredibly powerful, knocking your enemies around and carving huge chunks out of their health bars. It’s the combat equivalent of the Diablo series’ signature explosions of gold and items when mobs die, and its moreish as hell. 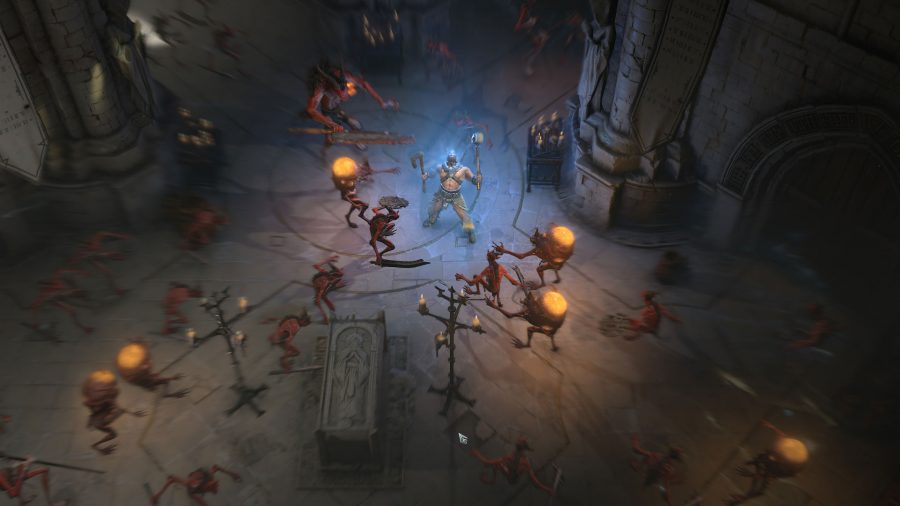 The two wolf familiars who follow you around as the result of another ability are good at attacking your enemies without getting stuck on terrain, but they also have a disconcerting habit of deciding to run away and target things off-screen as well, forcing you to fight whatever they randomly aggro on. It’s possible those mobs planned to attack me anyway, but there are at least a few situations where that doesn’t seem to be the case.

It feel like a miniaturised, disorganised World of Warcraft raid

The other two classes demonstrate the same epic, explosive power. The sorceress can freeze and shatter enemies, call down a meteor from above to blow them up, or mow them down as a ball of lightning. The barbarian, meanwhile, offers expanded versions of some familiar abilities and some brand-new ones. He’s not as flashy as the other two classes, but even without the bombastic spells, melee abilities light up the screen as he crunches through foes.

I take these characters through two dungeons, both of which offer the usual barrel-breaking, enemy-destroying, mini-boss experience, along with some open-world wandering, and a full-on boss fight. The open world is pleasantly, and surprisingly, three-dimensional – something the designers have been working hard on for Diablo IV. You’ll climb up and down as the terrain changes elevation, and that third dimension – especially compared with Diablo III’s painfully flat landscapes – makes open areas feel so much more alive. You can wander at will in this Diablo universe, rather than teleporting everywhere, which makes it seem much more like a real place – and a dark one, too, littered with corpses, blood, and the aftermath of sacrifices everywhere you turn. 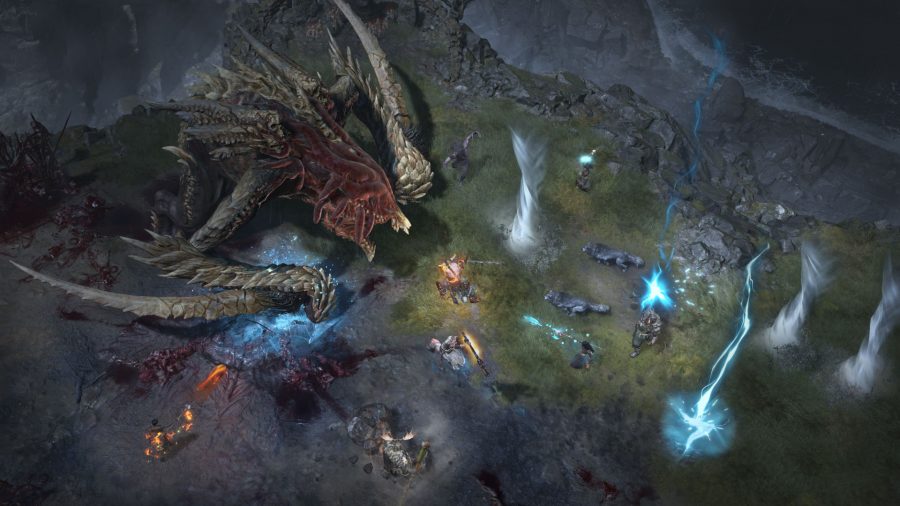 You’ll run across other players in the open world, with whom you can party up if you choose, or fight if you’re not the social type. PvP is being described as “consensual”. Other players are intermittent sights until the boss fight, when I suspect the layers we were playing on were combined to bring us all together, making it feel like a miniaturised, disorganised World of Warcraft raid.

It combines the fun of taking down an enemy larger than I could have done alone, with the joy of seeing other people get one-shotted by the giant, raking ground slash of a draconic creature who signals that ability far, far in advance. (Sorry, fellow players.)

Diablo IV has a long way to go before it’s fully cooked. But if things continue along this rocky, three-dimensional, and dark path, Diablo fans are in store for a remarkable sequel.