Lately, Microsoft have been under pressure from the public to catch up with its console competitors. People wanted more games for their Xbox and we PC gamers, well, we’re always after more games. At E3 this year, somehow, Microsoft actually managed to deliver with an impressive lineup.

If you missed the show or are looking for a refresher, look no further, as below we’ve rounded up everything that happened at Microsoft’s E3 press conference – or, at least, everything that’s relevant to us PC gamers.

Make sure you keep up with everything else happening this week with our E3 schedule. 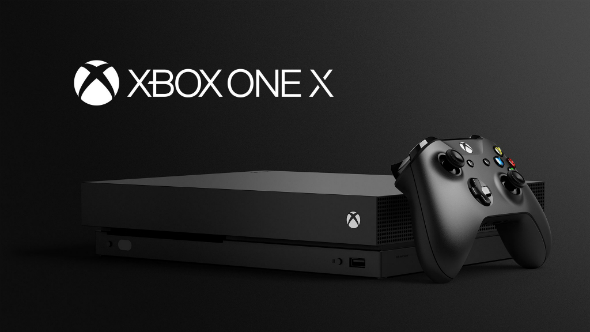 The first big talking point from the conference point was Microsoft’s unveiling of the Xbox One X. Previously known as Project Scorpio, the Xbox One X is being flaunted as the most powerful games console ever. You’ll have to do better than that to impress us PC gamers…

But hey, there’s reason for us on PC to pay attention to this black box. Now that Microsoft’s flagship console is putting out some decent power and performance, it makes it easier for developers to make games for both it and Windows 10. In fact, Microsoft were very big about boasting a forthcoming unification between PC players and Xbox players.

We’ll see about that. And, hey, Microsoft, where is that Xbox mouse and keyboard support you promised? That’d certainly help the unification along.

While BioWare already announced Anthem during EAs’ conference, during Microsoft’s the studio decided to show us the first gameplay. Have a watch above.

If you don’t know, Anthem is to be the BioWare’s competitor to the likes of Destiny. It’s a familiar sci-fi, open-world romp with lots of online players, except this time everyone is kitted out in Iron Man-like suits.

If you want the full lowdown on Anthem then check out everything we know about it.

We already knew about Middle-earth: Shadow of War and were suitably excited to see more of it at E3. And, yep, we got exactly that with a new trailer during Microsoft’s conference. We also found out a bit more about its combat and the much-loved Nemesis system.

If you want to spend more time in Middle-earth, we have a round-up of all the trailers so far. And don’t stop there – we also have a summary of everything we know about it– including release date, story, and mechanics.

Forza Motorsport 7 was leaked ahead of the Microsoft conference so it wasn’t a big surprise. But to have it confirmed for PC, a full-fat Forza, due to the Play Anywhere scheme – part of the unification between Xbox and PC – is plenty pleasant. If you want to see footage of the game running in 4K we have plenty of that.

Probably the most leaked game of this E3, Ubisoft decided to officially announce Assassin’s Creed Origins during Microsoft’s press conference rather than their own – though there were details to come out that one too.

This next game in the series takes place in Ancient Egypt, and not just a part of it, we’llhave the whole damn country to roam. And there will be camels. Yes, you can ride them. It’ll also be more of an RPG this time around, with skill trees, levelling up, and all that jazz.

If you were in need of more zombie action from this E3 then, don’t fret, State of Decay 2 is here. Its undead hands are round your throat and choking the excitement out of you – feel that?

If you played the first one then you know what you’re in for here. Parkour, survival, and zombies. But, maybe even better this time around. Sequel’s are always better, right?

Metro is good. Metro is terrifying. Metro is also getting a third game and we’re very much into it. If you like creeping around the Russian underground while some skinless monster nibbles your ankle this is the series for you.

But stop right there – Metro Exodus is different to the claustrophobic games that came before it. It lets you go outside, without a gas mask in places, exploring vast, non-linear areas. There are mutant bears and ravid dogs. Be nice to them.

If you’d like to know more then we have a big summary of everything we know about the game.

Terry Crews is probably the perfect person to promote Crackdown 3. His maniacal laugh appeared during Microsoft’s conference to give us a release date for this third entry in the rooftop-bounding, criminal-punching all-out destruction open-world fiesta. Cheers Terry!

Microsoft’s sea-faring, multiplayer adventure Sea of Thieves got itself another gameplay video this year. We get to see a bunch of pirates going on a treasure hunt because, of course, that is what pirates do. Soon after grabbing the gold, the pirates get into a fight, ship-to-ship, cannon fire abound.

Minecraft is known as that big blocky game all the kids play. But now it’s getting a Super Duper Graphics Pack so it can brush shoulders with the best in the business.

But it’s not all good news for Minecraft fans, apparently, as Microsoft are looking to leave the original version of Minecraft behind – with all of its amazing modding capaibilities – as they try to unify the console, PC, and mobile versions of the game. Yes, you might want to be sad about that.

When you think of Dragon Ball Z, you probably imagine huge pecs, massive blonde hair, and even bigger fights with, like, huge blue balls of fire and lightning. Dragon Ball FighterZ, a new 2.5D fighting game, captures all of those traits from the series with some seriously frenetic animation. It looks as wild as it should.

Life is Strange: Before the Storm

The rumours were true! Life is Strange is getting a prequel which is subtitle “Before the Storm.” We found out during Microsoft’s conference that it will follow Chloe before she became the hard-nosed teenage punk we know her to be.

What that means is there will be no time-rewinding mechanics this time around. And, as we found out a little after the announcement, Chloe’s original voice actor won’t be reprising her role.

Ori and the Will of the Wisps

Some people cried when they saw this announcement. Yes, Ori and the Will of the Wisps is the sequel to that sombre if beautiful platformer from 2015. The baby owl returns without its terrifying mother, and it seems we’ll be looking after it – awww.

Goddammit Cuphead why aren’t you out already? Oh yeah, it got delayed some months back. But hold up! It’s got a release date now. A proper one with numbers and everything. Time to go back in time with this 1930s animation-style run-and-gunner. And it’s co-op, too, so bring a friend.

The team that made Gone Home have another game on the way. It’s called Tacoma – perhaps you’ve heard of it? – and it now has a release date. You won’t be uncovering a story revealed in the domestic clutter of a home this time around – you’ll be doing it around a space station, occupied only by recorded holograms of the lost crew.

Surprising just about everyone was the cyberpunk-influenced “neon-noir” game The Last Night. It popped up at Microsoft’s conference, flashed lots of lights at us, popped out a few gunshots, then went back into hiding.

What is it? We asked the question over and over until new footage emerged to reveal it to be a cinematic platformer. Glad we cleared that up.

If you’re going to make a survival-based, battle royale-style game then The Darwin Project seems like a very obvious title. Perhaps too obvious. It’s a multiplayer game in which you compete with others to stay alive while trying to kill each other. It’s survival of the fittest for the esports generation.

You know what videogames need? More psychedelic rock. Send ’em wild. Oh, and would you look at that – a game called The Artful Escape is here to deliver. Full of dreamlike sequences, it will have you strumming a guitar while leaping across a dove’s back. Because why not?

Already in closed alpha on Steam, Deep Rock Galactic showed up at Microsoft’s conference to give us a healthy dose of rock-hungry space dwarves. It supports co-op, so once it arrives, you’ll be able to grab mates, grow beards, and start drilling into meteorites. Almost sounds like hard work.

Oh for goodness sake. How is anyone supposed to deal with something as cute as Super Lucky’s Tale? It’s been a while since the mascot platformer went out of fashion, but with A Hat In Time, Yooka-Laylee, and others bringing it back, it seems Microsoft doesn’t want to be left out. So here we are, staring an orange fox in the face, desperate to coddle it while fighting evil.