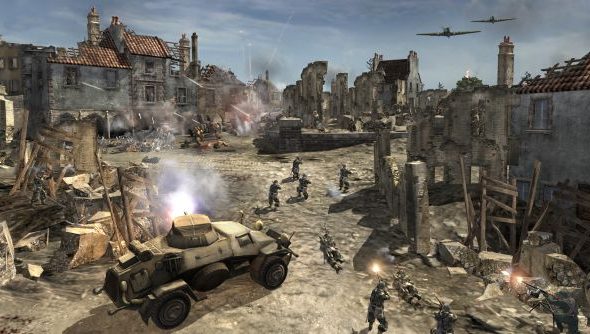 Midway through my first crack at Company of Heroes 2, I could feel the same familiar sensations taking over me.

Fear: despite the success, our lines were thin. The central point was the problem: despite my engineers deploying sandbags, mines and barbed wire across the main route in, the enemy AI had flanked to the right, and my anti-tank cannons were out of position. They were taking a hammering. If they fell, the rest of the line would follow.

Rage: while tanks pounded my right, mortars were landing among my infantry. Company of Heroes is still the only strategy game… hell, only game, to get explosive devastation right. I feared for my troops, weathering this Russian firestorm in the base of a newly created crater.

Love: I will argue until I’m blue in the face that Company of Heroes 1 is the greatest strategy game of all time. Not as competitively balanced as Starcraft 2, not as deep or taxing as a Total War game. But the most violent, the most impressive, the most combative game I’ve played. So, some detail. The early previews of Company of Heroes 2 have centred on a few facts: it’s still a World War 2 strategy game, but this time set on the Russian front. Russia are fighting Germany, and it’s snowed a lot. Snow means that tanks can fall through frozen rivers, and snow means that infantry struggle.

Which is nice. But the map I played didn’t have any snow. Nor ice. It was a 2v2 map set in the countryside, sliced in half by a gushing river. The third capture point is the focus: it’s set in a small island in the centre.

When developers Relic moved from Dawn of War 1 to Dawn of War 2, they radically changed the type of game they made: from a traditional RTS to an odd action RPG/RTS hybrid. This is out and out RTS with extremely little tinkering. The engine feels like a slightly upgraded version of Company of Heroes 1. The interface and UI: exactly the same as Company of Heroes 1 but with a few extra frills. The hotkeys: identical. The buildings and build orders: yup, all there.

Some will level that as a criticism. I won’t. Relic experimented with what Company of Heroes should be about with the latter expansion packs. In Tales of Valor they tested small scale combat, gave you direct control of the tanks; it didn’t really work. Company of Heroes is just fine: there’s no need to mess with the formula.

What I do worry about is that the Russian side needs a little more differentiation. In Company of Heroes 2, they have exactly the same classes of unit that are seen in the previous games: snipers, mortars, anti-tank guns, infantry… I felt like it was a mirror image of the US team. The only difference I could spot is that, in the late game, they could eventually build artillery emplacements. I want more. That differentiation can and probably will come from the active abilities and doctrines that you unlock as you play. Unfortunately, they weren’t in the version I was playing. The doctrines are off-map abilities you can call in; unlocked via a levelling curve that encourages aggression. The doctrines for the Russian players practically write themselves: I’d be hugely disappointed not to be able to call in the Company of Heroes equivalent of Vasily Zaitsev, for instance. Or a man that would come in and shout really loudly at your men to tell them to buck their ideas up. Or get shot.

Before we catch up with the battle, I have one last thought: between its launch six (SIX! Man alive I’m old) years ago, Company of Heroes morphed. Relic went and built a platform that could track progress, achievements and the campaigns you bought from one client. They even tried to adapt Company of Heroes multiplayer as a free-to-play game, without much success.

That opens up a series of interesting possibilities. The first: that Relic can take some of the learning from that experiment. But also that the infrastructure to allow players to buy new armies is already in place. As are the armies – available as the previous expansion packs. I wonder if Company of Heroes 1 and the expansions, Opposing Fronts and Tales of Valor, might simply slot into the game with minimal effort, unlocking the armies they introduced for play online. It would also open the floodgates to unlocks earned via multiplayer progress and microtransactions.

I won the battle; just. The artillery piece I started building with excess resources came online just as the tide appeared to be turning. It’s first shot landed right on the back of an enemy armoured car. The fireball lit up the screen. I yelped in satisfaction.