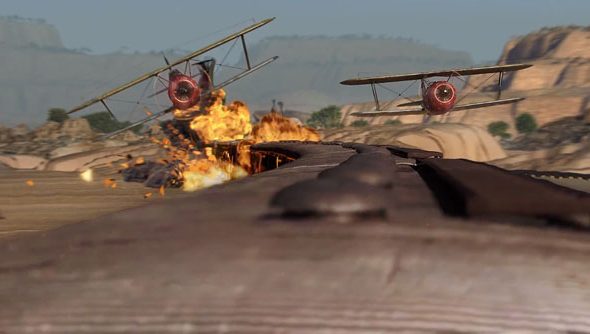 Oh yeah, today I’m all about worlds of war.

With World of Tanks Wargaming (almost literally) blew millions of players
away, drawing them in with accessible and exciting free-to-play battles


and getting them hooked on an ever-growing roster of hundreds
of war machines.

World
of Warplanes will see the developer take the same formula to the skies,
introducing whole squadrons of period planes which can gradually be
unlocked and upgraded through continued play. Will this sequel soar the
same way its predecessor has? I’ve been dogfighting my way through the alpha and I think this is definitely one to keep an eye
on in the coming year, both because it builds on the success of World
of Tanks, but also because it’s set to provide quite a different
experience.

Let’s start with the familiar. First of all, that foolproof free-to-play premise that Wargaming are famous for will remain exactly the same. There’ll still be random battles that you can
dive into at any time, all the participants pulled from an enormous
player base and matched according to the planes they’re piloting. As you’d expect, your
achievements in these battles will earn you the in-game credits you need to buy
more and better planes, but if you’re impatient to earn more cash,
opening your wallet will help you buy your way up the many-limbed tech
tree. Then
there’s the promise of fairness and balance from a developer with a
proven track record. Over the past year, we’ve heard countless game
designers tell us that their games will be free-to-play without being
pay-to-win, but Wargaming are one of the few studios able to provide
definitive proof that they can already do this. The ever-growing World
of Tanks remains a finely balanced game and it looks very much like
World of Warplanes will be just as carefully crafted. Even now, the
ongoing alpha is altering and rebalancing its aircraft, with the aim of
keeping each of them distinctive but preventing any from becoming
overpowered.

While
World of Tanks is all about making use of cover, hiding and,
sometimes, employing indirect fire, the fighters and bombers in World of
Warplanes can’t simply sit behind a hill. Apart from the occasional
bank around a mountain or dash down a canyon, you won’t be making use of
the scenery much in this game and instead your speed, maneuverability
and even altitude are all vital. Between similarly matched planes,
altitude can be the deciding factor, as those climbing to engage you
will lose speed, while you’ll be able to dive on your enemies like a
hawk. There’s
a lot to think about while you’re up there, drawing circle after circle
around your foes, banking and rolling. Not only do dogfights take
place in three dimensions, once you’re engaged in one it’s much more
difficult to keep track of the other planes around you. Battles become
intensely personal, meaning there’s more potential for single combat in World of
Warplanes and, once you’re in these situations, a greater chance that skill will be
the deciding factor rather than equipment or weaponry.
All this means that air combat can sometimes be very, very tough.

Throughout the alpha, the developers at Wargaming have been working towards a flight model that mixes realism with accessibility, something that won’t alienate new players, but which still rewards the resourceful pilot. What’ve they come up with? Well, while it’s
certainly nothing like what you’d expect from a flight sim, it does go
some way to ensuring that aircraft respond as they should.

Banking
heavily, for example, is a surefire way to lose speed and make yourself an easy target, and endlessly
spiralling your way about the sky as you try to find your mark is never the best way to win
any battle. That said, the game still has still a pretty forgiving flight model that makes it difficult for you to stall and also makes some of history’s more temperamental aeroplanes relatively easy to handle. Combined with the entry-level aircraft that alpha testers are starting off with, new players shouldn’t be discouraged. The flight model hass
certainly seen improvement since I started playing and I think it’s a
safe bet that Wargaming will continue to refine and adjust it. This
isn’t just going to be a game of dogfights, either. Ground attack missions have
you trying to destroy ships or installations that, it turns out, are
pretty difficult to hit when you have enemy fighters on your tail and
you’re streaking over the target area at 400 kph. This is where the
game’s bombers come into their own, trading handling for attack power
and boasting racks of rockets that will make quick work of anything on
the ground or, indeed, any poor plane that happens to get in their way.

And
I should mention those planes themselves. Oh yes, the planes, the
planes. So many planes. World of Warplanes has jets and biplanes and
bombers and twin-engined fighters and, like its land-based cousin,
they represent a whole spectrum of experience and feature the most obscure examples of their kind, planes that barely left the
drawing board. Some are light as a feather and just as weak, while
others are juggernauts of the sky, tough but sluggish. Expect Wargaming
to excel here, throwing plane after plane into the mix, and spending
hundreds of working hours pouring over the finer details of each.

There’s
a lot to look forward to and, bit by bit, alpha testers are seeing the
pieces fall into place. I think that we’ll see a fine companion for
World of Tanks emerge in 2013, a game built upon the same tried and
tested concepts, but giving us a very different way to fight. But you
know what? Can I tell you something? Can you keep a secret?

I’m
actually much more intrigued by the concept of World of Warships. Sure,
we barely know anything about it yet, but you can bet your ballast that
game is on my radar. Or my sonar.