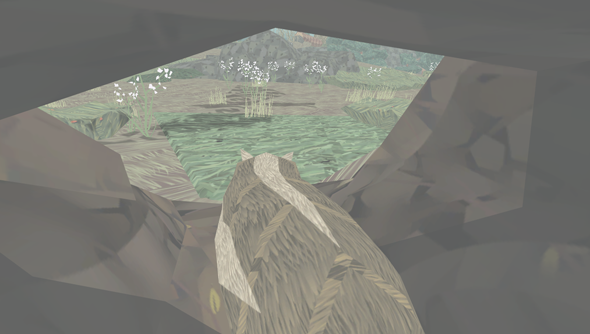 Might and Delight gave me five cubs to look after in Shelter and all but one of them died. In my defense, cubs, left to their own devices, have zilch survival instinct. But in their defense their mother should probably recognise they’ll waddle a little slower than a full-grown badger when crossing a raging river. A mother badger should likewise probably watch out for them in a forest fire.

Like I said, I’d make a naff mother badger. But that doesn’t mean I didn’t enjoy every minute of my miserable motherhood.

You start Shelter by abandoning your sett. Your cubs have grown too large for you to bring back enough food for all five of them every day. So begins a journey through the seasons, with each passing level your cubs grow and the scenery changes.

Starting in spring, there’s plenty of fruit on the trees and vegetables in the ground. You can bring apples to earth by headbutting tree trunks or pull up onions with your teeth to feed your cubs. Later seasons have you hunting foxes and fishing for frogs.

But the later seasons also bring with them environmental threats. Autumn rains cause the mountain’s river to burst its banks. And, as the days draw on, the forest dries leading to fires.

Through all of this you must lead your cubs. It’s simple enough, they follow you wherever you go. There’s no hold command so they’re always nipping at your heels. When you run they try to keep pace, when you hide they lie down in the bushes next to you, and when you knock apples out of the tree they sit and eat with you. 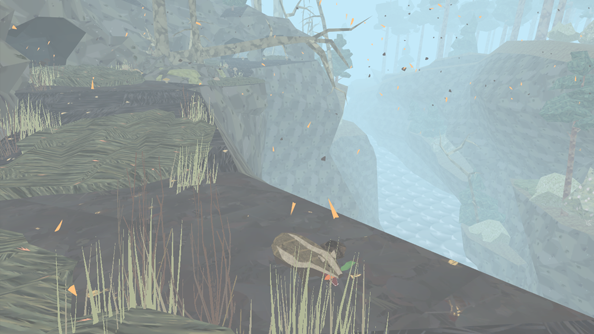 Though, it’s more than charm that elevates Shelter into Game of the Year territory. After all, mechanically, Shelter is too simple. You walk down a linear path to the level’s end, occasionally knocking a tree or two to feed your cubs. It should, by that standard, be a boring game.

Yet its simple skeleton is wrapped in meaning. Meaning that makes the game affecting and absorbing.

When a cub dies it’s wholly your fault and you feel it.

I lost my first cub in the dark. It’s nighttime and you’re guiding your caravan of badgers through a gully. Your vision is limited to a tight ring about your body. Your young crowd around you within the ring. That is, until they hear a growl in the dark. The noise sends them running into the night. If you don’t find them fast enough, as I didn’t, one of them is taken by the something that’s in the darkness.

The baby badger’s death isn’t highlighted by the game. Five badgers ran into the dark, four came back. There wasn’t even much of a noise to suggest what had happened.

But, after I lost that cub, I never left the others to run into the night. 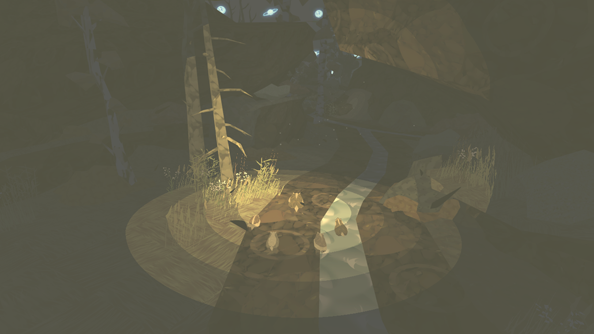 I lost my next two cubs to the river.

If they’re caught in the floodwaters as you cross the river then they’re washed away. Again, there’s no noise or HUD marker to say you’ve lost a cub, just the diminished group of yipping badgers following you.

I hated crossing the river and every time I did I span the camera back to watch what was happening with my cubs. But there’s nothing you can do to make them move faster. All you can do is watch as the wave crashes over the group and one cub is washed away.

The last of my cubs to die hurt the most. After we crossed the last stretch of water it collapsed on the bank, curled up, and died of exhaustion. A pathetic death.

I rarely ran when I was left with only one cub. I didn’t want to lose it from my sight. I walked close to it till the game’s necessary conclusion. 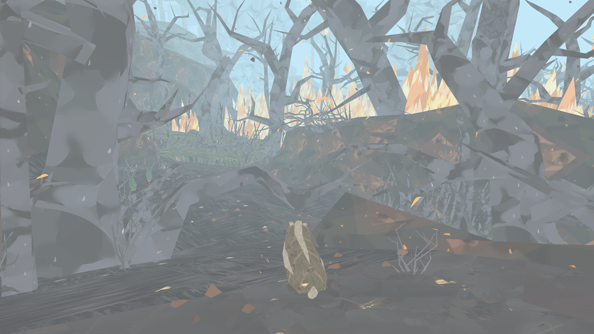 Last year I chose The Walking Dead as my Game of the Year. Over the course of five episodes it forged a paternal relationship between me and Clem, your ward in the game. That bond was made with hundreds of lines of dialogue, human characters, and choices that altered the course of the game.

It would be a lie to say I felt as strongly towards the cubs in Shelter as I did, and still do, feel towards Clem but that Might and Delight were able to approach that bond in such a short time with so limited an interaction says something of why their survival game is special.